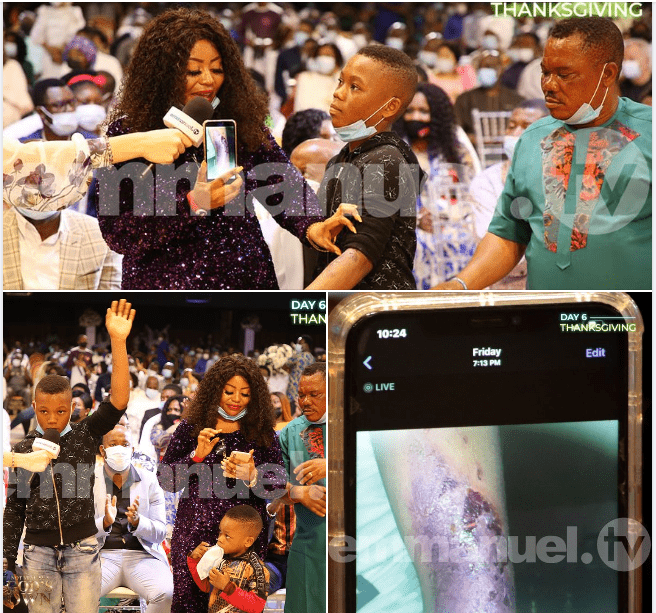 A young boy have been reported to have received a miraculous healing of a fractured armed while watching the funeral rite of the late Popular Nigerian preacher and founder of the Synagogue Church of All Nations (SCOAN), Temitope Balogun Joshua, TB Joshua on a mobile phone.


A post shared on the late prophet Facebook page on Sunday, July 10 said Cherry Nnadi, mother of the young boy identified as Success in a testimony said she was watching the laying in state of the prophet together with her son when the fractured armed began vibrating.

She narrated, upon turning to her son, he exclaimed that he could see Prophet T.B. Joshua ministering healing to his arm, with a cameraman standing beside God’s servant.

Sharing the miracles together with pictures of the boy and his mother, the post reads

“I experienced something I had never seen in my life,” so began Cherry Nnadi as she testified about the experience of her son Success as they both watched the laying-to-rest service for Prophet T.B. Joshua on Friday, July 9, 2021. Watching on the phone alongside her son, whose left arm had been fractured, Cherry suddenly saw Success’ fractured arm vibrating. Alerted to the miracle happening right before her, Cherry turned to her son, who exclaimed that he could see Prophet T.B. Joshua ministering healing to his arm, with a cameraman standing beside God’s servant. A bit incredulous at what was happening, Cherry asked her son to stop joking but the boy insisted that he had indeed been healed. He advised people to continue believing in God’s power, even as he added: “Prophet T.B. Joshua is not dead; he is only sleeping.” Gracious Nnadi, Success’ father, thanked God for the miracle experienced by his son and urged people to keep believing in God’s power.#TBJoshuaLegacy”

Popular Nigerian preacher and founder of the Synagogue Church of All Nations (SCOAN), Temitope Balogun Joshua, TB Joshua died on June 5 at age 57 at his residence in Lagos.

Re was reported to have died shortly after he led bible teachings with Emmanuel TV on the theme, “Time for everything – time to come here for prayer and time to return home after the service.”

His mortal remains was laid to rest over the weekend at the church premise at Lagos in Nigeria.