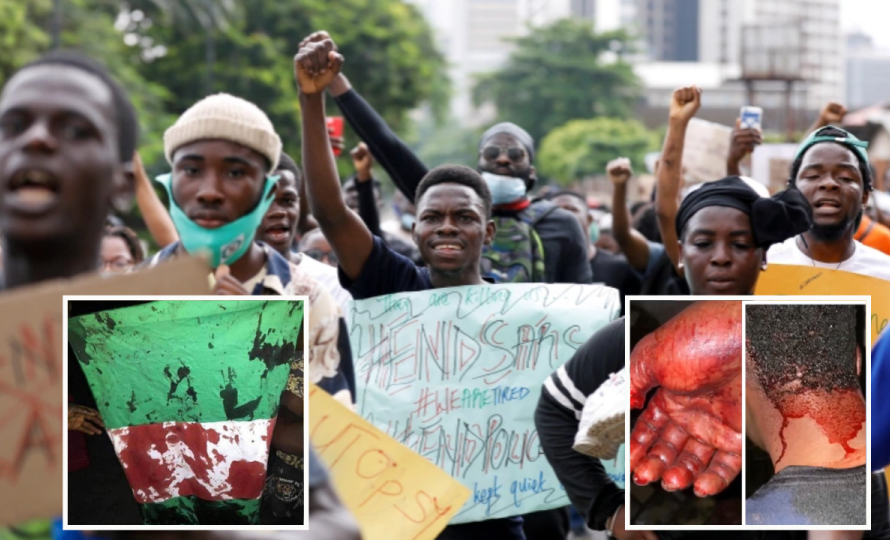 A peaceful demonstration by the people of Nigeria to demand an end to police brutality on Tuesday, October 20, 2020, turned bloody as military men opened fire on an unarmed protester at Leki, a city in South-East of Lagos State, Nigeria.

A disturbing video circulating on social media and sighted by GhanaPlus.com had scores of uniformed men firing into the crowd of mass protestors on the street of Leki.

The unfortunate development, reports indicate happened at Leki toll gate on Tuesday night at about 7 pm and saw many injured and others died in the process.

An eye witness has reported that at least 20 persons had lost their lives while about 50 others have suffered various degrees of injuries.

A video cited has uniformed military men blocked the road and opened fire on the protesters who run helter-skelter for their lives amidst shout of they are shooting in the darkness of the night.

In another recorded live by Nigeria’s djswitch, the Leki toll gate entrance was on fire with all access routes blocked denying protester entry and exit.

In the video in which one person had sustained a gunshot wound, protesters called for an ambulance to assist the injured.

READ ALSO:  Why bother finding Nigeria Jollof when you have the superior version in Ghana – Jon Benjamin

“Look at Lagos ladies and gentlemen, look at over there, Look at Lagos on fire, they have blocked everywhere and they want us to pass so they can shoot us there in that fire, look at fire over there,” djswitch said.

“Look at the toll gate they’ve put fire so there is no going in and coming out,” she added.

Other videos heard a man screaming and ordering fellow protesters to move away from the scene while another shows a chaotic situation at one hospital where victims were been attended to.

Also, another report available to GhanaPlus had pictures of two victims bleeding profusely. A voice report accompanying the pictures revealed that they had called almost all hospitals in the state but there was no ambulance to come to their aid.

READ ALSO:  See all the exclusives you missed from the burial service of J.J Rawlings mother in Accra

SARS have been reported to have been engaged in a tall list of abuses including kidnapping, murder, theft, rape, torture, humiliation, extortion, illegal roadblock and search, unlawful arrest and detention, extrajudicial killings etc.

With multiple evidential videos and pictures to prove the abuses, Nigerians including celebrities, early this month took to the street to demand an end to the police arm for their safety.

However, the peaceful campaign took a different turn with an attack on several police stations and release of inmates, stealing of police equipment among others.

Currently, several states like Lagos, Ekiti, Osun, Abia, Edo, Plateau have all been placed under a 24hour curfew to enable the country to restore some peace and order.

Hmmmmmmm!!!!! God have mercy. This is heartbreaking. This is barbaric. Cruelty at its peak. Arise o Lord, show forth. God, save the land of my formative years. 9ja needs you, oh Lord! 🇳🇬 🇳🇬 🇳🇬 🇳🇬 🇳🇬 🇳🇬 needs tranquility.