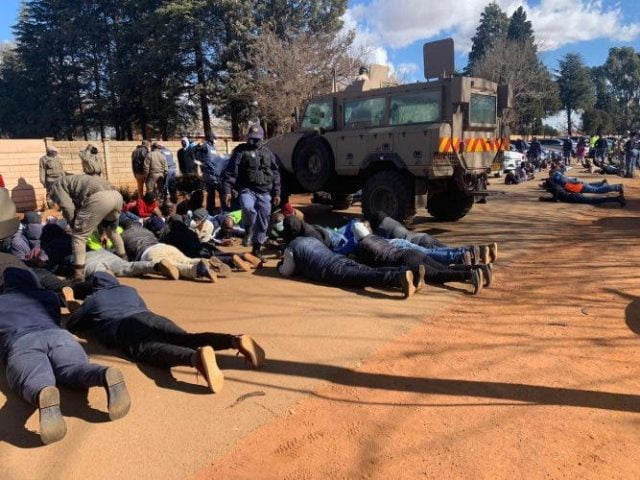 40 persons have been arrested

Five members of the International Pentecostal Holiness Church in Zuurbekom in the West Rand of South Africa have been killed over an alleged power struggle over the church’s leadership position.

Four of the five persons were found shot and burnt to death in cars, while the fifth person, a security guard, who was thought to have responded to the incident, was fatally shot.

Eyewitnesses report that the men who stormed the church premises on Saturday, July 11, 2020 and took them hostage were part of a splinter group of the church.

According to South Africa’s Police Service (SAPS) national spokesperson, Brigadier Vish Naidoo, a group of attackers indicated to those inside “that they were coming to take over the premises”.

The police had since rescued men, women, and children from the “hostage situation” and arrested at least 40 persons in connection with the attack with dozen of weapons seized for evidence purposes.

Five rifles, 16 shotguns, and 13 pistols, along with other weapons were found by the police at the premises.

Five rifles, 16 shotguns, and 13 pistols, along with other weapons were found

“We’ve arrested all those we reasonably believed are suspects. They have been taking in for questioning,” said police spokesperson Vish Naidoo.

The police have since launched a high-level investigation into the exact circumstances surrounding the shooting and to find the exact cooperate behind the attack.

They have also deployed men to safeguard the lives of congregants.

The IHPC is one of the largest churches with over three million members in Zuurbekom. Image / Veli Nhlapo(Sowetan)

The International Pentecostal Holiness Church is said to be one of the largest churches in that region with about three million members.

The church had made tabloid headlines over missing money and leadership squabbles since the death of its founder, Comforter Glayton Modise in 2016.

Two years ago there were reports of shooting over similar issues.

The intense battle was reported to have been between elders of the church and the founder’s daughter, Jeanette Khumalo.