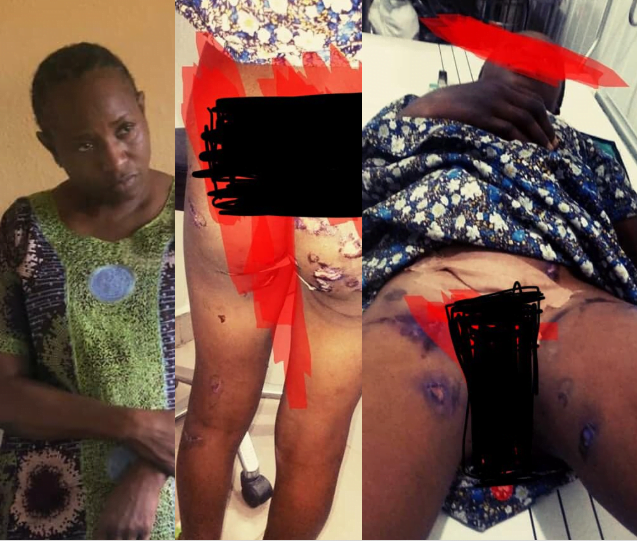 A Nigerian deaconess has been arrested by the police for allegedly inflicting series of injuries on the body of a 14 years old girl.

The Deaconess, Mrs. Iyema Oyemola Oyewole of the Living Faith Church in Barnawa, Nigeria was reported to have tortured the girl by burning her vagina, buttocks, face, and other parts of her body with lighter, hot knife and inserting hot sticks before rubbing pepper in it.

It was alleged that Princess was stopped from going to school, beaten frequently, made to sleep in the toilet and drink water from the toilet when thirsty.

Pictures accompanying the report shared by Linda Ikeji’s Blog, yesterday, July 11, 2020, had the girl who had been living with the family for the past one year’s face, lips, thighs, legs and private part covered with injuries.

The deaconess who is also a refinery staff was reported to have carried out the act together with her five children while her husband locked himself up, unperturbed.

Mrs. Oyewole has a son who beats Princess at will. Punishes her even under the rain. When all of these happens, the husband locks himself in his room and pretends like nothing is happening. Her children Tito and Nifemi would hold the girl’s neck while the mother would burn her buttocks and vagina with lighter” the report said.

“In the interview video clip, you’d hear the girl say, “They would now give me leaves like an animal” while in the toilet before the girl would come out to work her ass off,” the report emphasizes.

Story of a Princess

Princess was left in the care of the deaconess by her parents to enable her to pursue her education after the couple relocated from Kuturah in Kajuru Local Government Area of Kaduna State due to series of attacks by killing forces.

However, after unsuccessful attempts to see their daughter for over a year, the family became alarmed and sought help from a Non-for-profit organization (NGO) to enable them to rescue her from the deaconess who had denied them access to the girl severally.

According to the report, it was through the intervention of the NGO that the current state of the girl was discovered.

The deaconess during interrogation was reported to have said that “I didn’t know the fire was burning very well like that,”