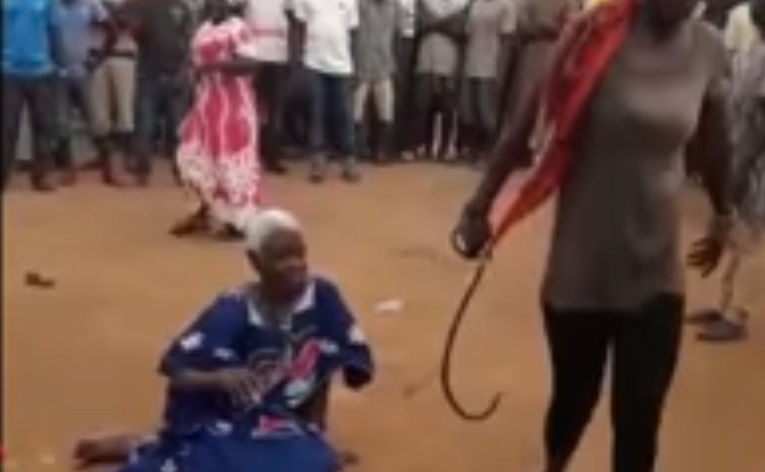 90-year-old Akua Denteh was lynched to death at Kafaba for being behind a lack of rainfall in the community.

A report carried by 3news.com said that was the latest information gathered concerning the sad incident which claimed the life of the old woman last week.

The 90-year-old woman was reported to have been among 17 other women who were tortured over allegation of witchcraft, however, failed to confess or admit to the allegation despite insistent from her accusers.

“She and other 17 women were tortured in one night but the rest admitted being witches but this very woman refused to admit, hence the lynch,” TV3’s Savannah Region reporter, Christopher Amoako was reported to have said.

“This woman has been tortured for long but she refused. They wanted her to admit she was a witch but she did not,” Christopher Amoako explained.

Akua Denteh, believed to be in her 90s was lynched to death at Kafaba in the East Gonja Municipality of the Savanna Region over witchcraft allegations.

The community perpetrated the acts after a soothsayer, identified as Hajia Filina pronounced her a witch and spiritual force behind the lack of development in the area.

The woman has since been laid to rest in the community.

The development had been condemned by Ghanaians including the President, Nana Addo Dankwa Akufo-Addo, the Peace Council, the Chief Imam, some NGO’s among others.

READ ALSO:  We have no reason to order a re-run of 2020 elections - Supreme Court tells Mahama

So far, the Savannah Regional Police Command has arrested the chief of the community Seidu Yahaya after a call from the children of the late Akua Denteh for his arrest.

A teacher and five others including the soothsayer identified as a suspect by the Ghana Police are currently on the run.

The Ghana Police had since offered GHC 2,000 for information on their whereabout.