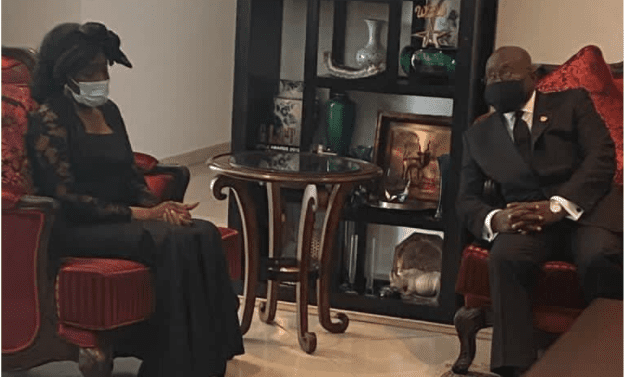 The President of Ghana Nana Addo Dankwa Akufo-Addo has paid a courtesy visit to the wife of the late former President Jerry John Rawlings, Nana Konadu Agyemang-Rawlings at their resident at Ridge in Accra.

The visit was to commiserate with the former first lady, her children, and the entire family over the death of the former president, which occurred on Thursday, November 12, after a short illness.

The president was in the company of the Vice President, Dr. Mahamadu Bawumia, his wife, Samira Bawumia, and some key members of his administration during the visit.

Among them was the Chief of Staff, Madam Frema Opare, the National Chairman of the New Patriotic Party (NPP), Mr. Freddie Blay among others.

Rawlings family paid a visit to Nana Addo over his death

Earlier, yesterday, some members of the Rawlings family including his daughter and Member of Parliament for Korle-Klottey Constituency, Dr. Zenator Rawlings paid a courtesy call on the President to officially informed him of the death of the Former President, Jerry John Rawlings.