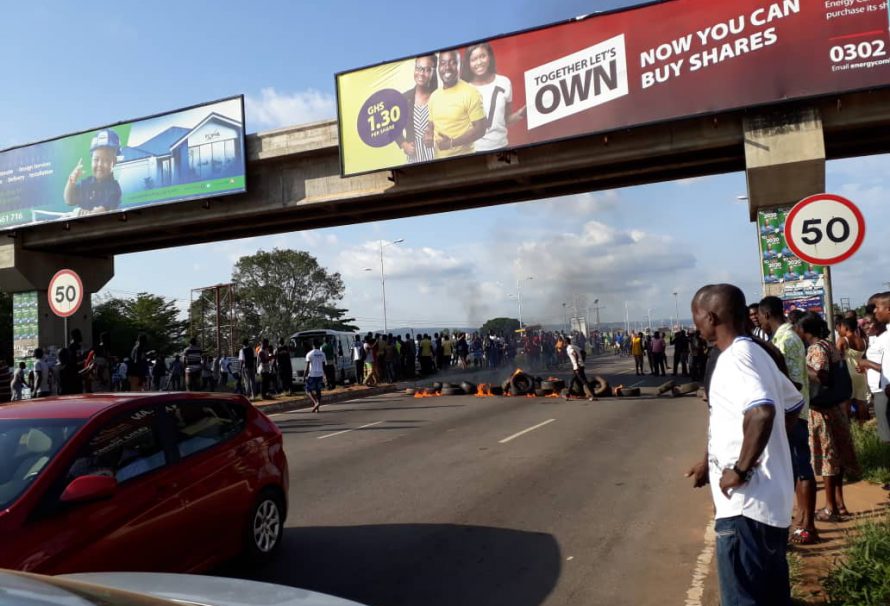 Dozens of residents in Madina-Adentan suburbs of Accra have hit the streets again in a peaceful demonstration to demand footbridges on the 7-kilometer highway.

Despite the government’s award of contracts for the six footbridges to be constructed residents still poured out onto the streets, chanting, hoping, and demanding their right to a safe road as citizens.

The highway which links Accra to the Eastern Region and other parts of the country has been anything but safe.

There are no footbridges for residents who intend to cross to the other side of the road. They, therefore, attempt to cross the six-lane road by themselves but many of them have met their untimely deaths as a result.

There have been conflicting figures on the number of casualties.

Residents say over 195 people have died on the stretch of road but the police have put the figure at 24 with over 160 injuries.

But one more casualty, a student from the West African Secondary School, who died on the spot after being knocked down by a taxi last Thursday triggered a bout of violent demonstration.

Car tires were burnt in the middle of the road. Image / kasapafmonline.com

The road was blocked; tires were burnt in the middle of the road as dozens poured out in anger onto the streets to protest the death of the young school girl. The residents clashed with the police hurling stones at them and the police returning fire.

A young boy who was in a vehicle with his mom was hit by a stray bullet and has since been treated and discharged at the Nyaho clinic.

A day after the demonstration government announced that six contractors will complete the six bridges in no time. The streets lights that did not work on the same stretch of road for months suddenly began to work.

These improvements notwithstanding, the residents still went on the demonstration on Monday to underline the extent of their displeasure about the situation they find themselves in.