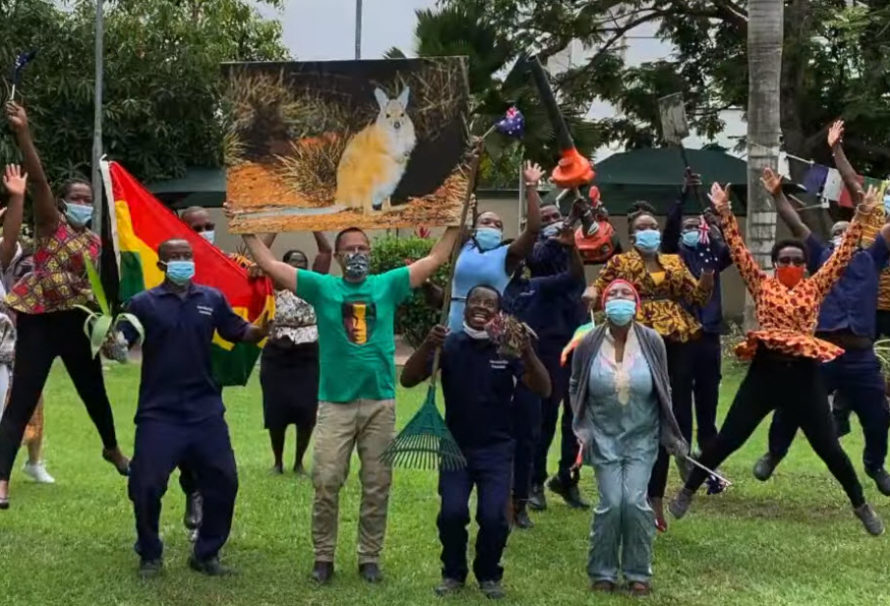 The Australian High Commission in Ghana has joined in the popular Jerusalema dance challenge, a global dance challenge that has taken the world by storm.

The staff of the high commission, together with the High Commissioner, Gregory Andrews in a video cited by GhanaPlus.com on social media danced their heart out to the popular Jerusalema song by South African musician Master KG.

The staff, including security personnel, cooks, cleaners, gardeners lead by Gregory Andrews engaged in a coordinated and hearty dance moves showcasing to the world the dynamism that makes up the commission.

With people from different background, colour as well as career path they uniformly exhibited their dancing dexterity in solidarity with Africa.

His dog, Kofi was not left out of the dance in which some staff danced with their working tools.

Sharing the video of the commission’s challenge on social media, the Austrian High Commissioner to Ghana, Gregory Andrews said the dance challenge was in solidarity for everybody working their ass off in Africa.

According to him, dancing lift once sprite and was optimist the video in which his stuff danced to Master KG’s popular Jerusalema would cause likewise effect.

“We have taken on the #JerusalemaDanceChallenge. We dance in solidarity for everybody in Africa who is doing it tough at the moment. Dancing lifts the spirit and expresses our humanity. Making this video lifted our spirits and we hope it brings a smile to your face too. #TeamKofi.” he said

Last Month, South Africa adopted the challenge as part of an event marking the country’s 2020 Heritage Day celebration upon a declaration by their president, Cyril Ramaphosa.