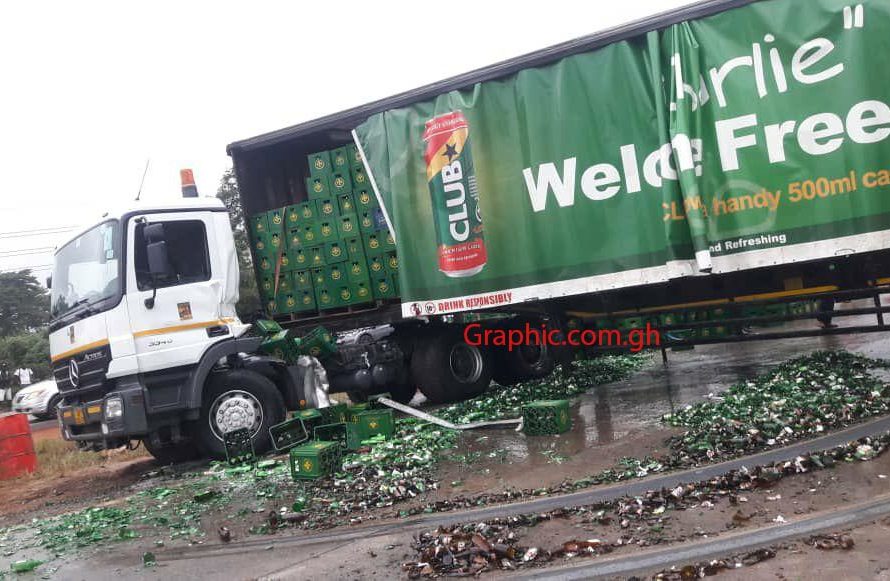 Some residents and commuters on the Accra-Tema Motorway on Thursday, September 10, morning outdid themselves with beer drinking spree as a truck carrying Accra Brewery Limited’s Club Beer, and Golder was involved in an accident on the busy stretch.

A video cited by GhanaPlus.com indicates that the drinking spree took place as early as around 3 am to 6 am there about while the resident and commuters helped carriers of the beer offload from the accident vehicle and pack others which have fallen and blocked the road at a convenient place for reloading into another.

Young people of various age groups, including men, women, and a mentally unstable man took turns to exhibit their pros on alcohol consumption in broad daylight and on live UTV’s cameras at about 5 am Thursday morning when the news media got to the accident scene.

READ ALSO:  I will prosecute corrupt officials, even my own - John Mahama

Speaking to UTV, one young man said he had already consumed 50 bottles of the alcoholic beverage in the early hours of the day, while another said he had taken 1o bottles and could consume more if permitted.

Speaking to the reporter, a woman believed to be a mother who said she had taken two bottles already said she would be able to consume about twelve bottles before leaving the scene.

“Since I have seen it is happening here, today I will not go to work, if I get drunk I will sleep,” she added.

Another video of the incident cited by GhanaPlus.com shows another woman pouring the alcoholic beverage into a bucket perhaps for storage purposes for future use.

The Accra-Tema motorway accident involving the beer truck report said occurred early hours of Thursday when it was drizzling causing the road to be slippery.

Reported to have occurred over a failed attempt by the truck carrying the bear to overtake another vehicle, an eye witness said 15 other vehicles got affected running into each other in the process.

An unconfirmed report said one person (a driver’s mate) lost his life while others including a taxi driver sustain various degrees of injuries.

Watch the videos below