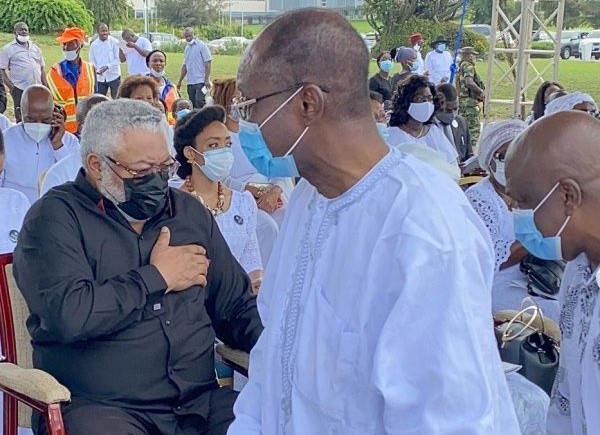 Mother of the former President of Ghana, H.E Jerry John Rawlings, Madam Victoria Agbotui has been laid to rest at her hometown in Dzelukope in the Volta Region.

The mortal remain of the 101-year woman who passed away on September 9, 2020, was laid to rest after a high profile burial ceremony was held in her honour at the forecourt of the State House in Accra and a subsequent private ceremony at the Keta School Park in the Volta Region.

In attendance of the all-white theme burial service in Accra was the first family of the republic, Nana Addo Dankwa Akuffo-Addo and his wife, Mrs. Rebecca Akuffo-Addo.

Also present was the Vice President of Ghana, Dr. Mahamadu Bawumia, members of the diplomatic corps, Ministers of State, members, and leading members of the ruling New Patriotic Party among others.

Madam Victoria Agbotui, mother of the former president of Ghana, Jerry John Rawlings was reported dead on Thursday, September 24, two weeks after she celebrated her 101 birthday.

Pictures of the elderly woman cutting her birthday cake with the help of her son and daughter-in-law Nana Kunadu Agyemang Rawlings went viral on various Ghanaian social media platforms.

Madam Victoria Agbotui report said came to limelight in 1979, at the time her son J.J Rawlings and the Free Africa Movement first staged a coup in the country and later headed the catering department of the Presidency during the tenure of his son as the President.

She was reported dead after being unwell for a while and left behind three children including the former President J. J. Rawlings.