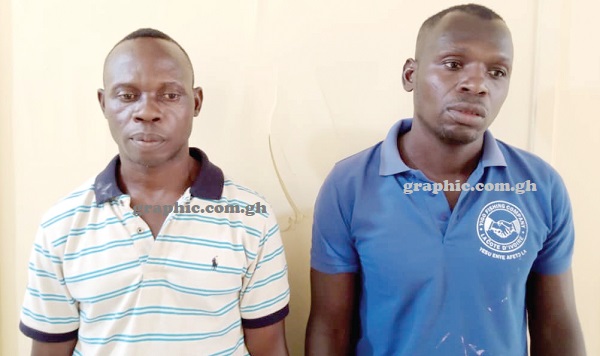 A father has been sentenced to 8years imprisonment with hard labour, for selling his two sons for an annual fee of ₵300 each.

Mawuli Sosu, a 43-year-old mason from Keta, sold his two sons, aged 18 and 15 years, to the fisherman, David Akweteybor, who resides at Tewoekpo, an Island near Tokoranu, in the Dambai District in the Volta Region to fish on the Volta Lake.

The father was reported to have been paid GH¢300 as a yearly fee for each of his sons.

The court sentenced Sosu to seven years on the crime of provision of a trafficked person, eight years on the human trafficking charges and five years for the charge of conspiracy.

The sentences are, however, to run concurrently.

The fisherman, David Akweteybor was also handed a five-year jail term for conspiring with Sosu to exploit the boys on the Volta Lake.

The Ho Circuit Court presided over by Mr Felix Datsormor, yesterday convicted Sosu and Akweteybor on the charges leveled against them after a full trial and sentenced them accordingly.

The trial judge, who said the sentences were to serve as a deterrent to others, further ordered the convicts to individually pay GH¢5,000 compensation to each of the victims.

Presenting the facts to the court, a State Attorney, Mr Andrews Dodzi Adugu, said the complainant was Joyce Nyamekye, the mother of the victims and a petty trader living at Kpone Kokompoe, near Tema.

Sosu and Nyamekye were married but have been separated for a number of years.

The prosecutor said the children had been living with their mother following the separation, until she sent them to their father at Keta during a school vacation.

However, when school reopened, all attempts by the mother to get the children return to continue with their education failed as the father refused to send them back, while all attempts to get access to her children also proved futile.

Following a period of waiting, the children’s mother went to Keta only to be informed that they had been sold to a fisherman known as T. T. Amekudzi (now deceased) at Tewoekpo.

The prosecutor said on June 9, 2017, the complainant saw Sosu in Tema and made a complaint to the Tema Police leading to his arrest.

Sosu reportedly confirmed that he had sent the victims to T. T. Amekudzi at Tewoekpo to fish and farm at an annual fee of GH¢300 per child.

On August 31, 2017, Sosu led the police to Tewoekpo where the victims were rescued from Akweteybor, a relative of T. T. Amekudzi.

The prosecutor told the court that Akweteybor explained that the children had all the time been with Amekudzi until his death when they were transferred to him on the same terms as before.

The two brothers did not have the benefit of going to school throughout the period of their servitude.