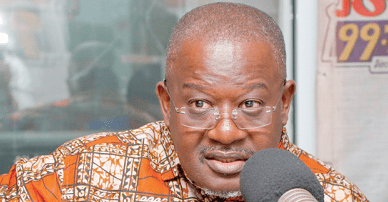 Energy Consultant and Former Vice Chairperson of the Public Accountability Committee, Kwame  Jantuah has said the #FixTheCountry campaign spear headed by the youth to demand accountability from government is not only about the New Patriotic Party(NPP) government but the National Democratic Congress(NDC) as well.

That he said was because the actions of the crusaders, most of whom had been part and parcel of the Republic beginning 1992 stem from successive government inability to improve the lot of Ghanaians over the years adding the NPP was only at the receiving end because they happen to be in power.

“I think one of the challenges things that it has brought this about is that that the youth that we talking about started with this republic, 92 to 2021, is 28years so some of them have seen how successive government have handled the economy and this where government should listen, if you read what they said, it said members of the movement have expressed displeasure over successive government failure to improve the living standard of Ghanaians. Is not only the NPP is the NDC too because these two parties had been in power,” he said.

The Energy Expert made the remarks on TV3 MIDDAY Live monitored by GhanaPlus.com on Monday, May 10, 2021.

This is not the time for blame games

According to him, it was not time for any political party or citizens to point accusing figures at each other but a time to profess and find sustainable solution to the country’s challenges.

” It isn’t time for blaming it is time for solutions. And I think one of the major challenges is that they had lost trust in the promises of government to deliver what they say they will deliver”.

He explained no one can deny the  youth their right to speak about the challenges that confront them as citizens, however, what is expected going forward was an opportunity for both government and the youth to engage each other to find a lasting solution to the problems confronting the country adding it was a matter of communication.

He has therefore called on the President to dialogue with all stakeholders, the opposition, the youth, and civil society organizations to find the solutions to the country’s problem.