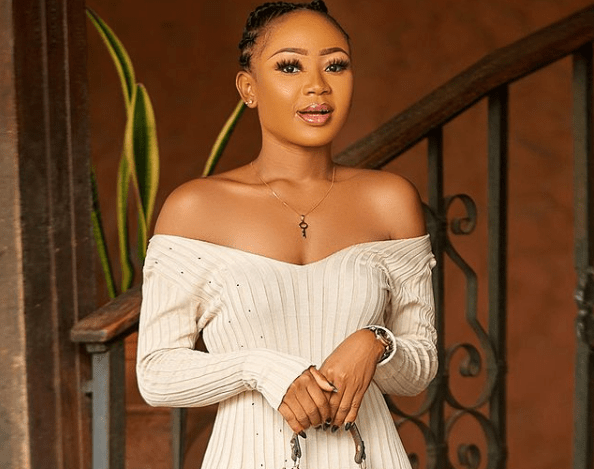 A section of the Ghanaian public has taken to social media to express their views following report that Ghanaian actress, Rosemary Brown also known as Akuapem Poloo has been convicted over the nude photos of herself and son she shared some month ago.

Report indicate the actress who was facing charges of publication of obscene materials and engaging in domestic violence in a case brought before the Court by Child Right International, a child right non-governmental organization was convicted on her own plea on Wednesday, April 14.

It could be recalled that the actress in celebrating her son’s seventh year birthday took to social media to share nude photos of herself and son.

However, since the report of his conviction hit the media, many Ghanaians has taken to various social media platforms to share their view on the development.

While many sympathies with the actress because of her son, others were of the view that the country should focus its energy in arresting public official  and businessmen whose actions has affected the state directly and many lives negatively.

For me, its the fact that we apply different sets of law to different kinds of people depending on who is involved. We need to rise above kangaroo justice and subject all to the same standards. Akuapem Poloo may have erred, but let's tamper justice with mercy. She has learnt.

Akuapem Poloo posted her own naked pic. Yes she did but I haven't seen the pic yet but leaders of this country Ghana are spending the country's money like it belongs to them and they are walking freely like fishes in the ocean.

Nam 1, Kwesi Nyantakyi and Wayomi all the roam about freely buh dem arrest Akuapem Poloo for sharing her nudes, her own nudes oo ahh nudes wey no be urs too😒 them go do make the gals stop sending us brezz p33🥺🥺 #FreeAkuapemPoloo

I want the folks in my replies who claim this case is not about control over Ghanaian women’s bodies to explain why NAM1, who duped thousands of Ghanaians, remains free at home while Akuapem Poloo is in police custody for posting a picture with her son?

Jokes aside, how on earth did NAM1 and Osafo 'Kroll' Marfo escape jail but Akuapem Poloo is going in for a seemingly minor offence ?

1/3 please free akuapem poloo we all know she posted nudes of herself and son but she's not the first and definitely won't be the last yeah. we were all on this space when the preacher man's son posted nudes of himself on social media and nothing was said about it …

The problem here is equality. Someone in affiliation with a top government official wouldn't even be convicted if he/she is in Akuapem poloo's shoes. No one is above the law but doesn't entirely reflect in our country

Lol just read the 3 charges against Akuapem Poloo. But the gravity of financial offense people perpetrated and walked free, Ghana laws be trying to do the most jokes😤💔

A member of parliament was caught on tape firing warning shots but she was never arrested, Funny Face fire ein own p3 then boom they arrest…. NAM1, Kwesi Nyantakyi, Wayome, and others are walking freely… but Akuapem Poloo has been dragged