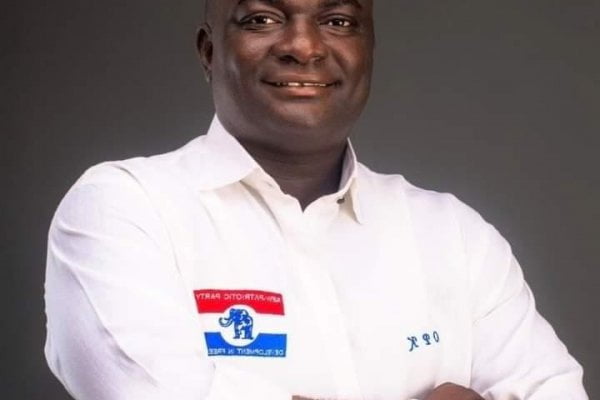 Mr. Davis Opoku Ansah, a parliamentary candidate for Mpraeso Constituency of the New Patriotic Party (NPP), has advised Ghanaians to re-elect President Nana Addo Dankwa Akufo-Addo to the office to allow for the continuation of the massive infrastructure plans to boost the productivity of the country.

According to him, the Government had made considerable gains in improving the educational policy and infrastructure of the country, adding that, the free Senior High School Policy alone had more than 1.2 million students benefiting from it.

Mr. Ansah speaking at the inauguration of the party’s constituency campaign team and working committees at Asakraka in the Mpraeso Constituency of the Eastern Region said Government in addition to the execution of its flagship Free SHS Policy had further improved upon the infrastructure of schools in the country as a means of sustaining the programme all the while absorbing the examination fees of all the final year students.

He noted that parents could as a result invest the monies set aside for their wards fees into their businesses or to meet other pressing demands of their families.

He added that the Akufo-Addo-led Government had also swept clean the National Health Insurance Scheme (NHIS) debt it met when it took over from the previous government and had further improved the effectiveness and operational pace of the scheme.

“When this government took office, the NHIS was deep in debt to the extent where service providers were in debt because the government then couldn’t pay them. However, we have since paid all the debts owed them,” Mr. Ansah stated.

He, to the campaign team, advised them to be hardworking and diligent in their duties and to work with the values and attributes the Party held and to ensure that the Party could achieve the 30,000 vote target in the constituency through hard work and dedication.

“Let’s forge ahead together and work hard for victory. Let us bring out our best in this campaigning season to deliver our targeted votes,” he said.

Mr. Davis Opoku Ansah furthermore vowed to place the concerns of the constituents before all else and to ensure that the social and economic needs of the people were met through the provision of the basic social amenities and more as well as to increase the employment opportunities within the constituency.

The campaign team has the parliamentary candidate and the Constituency Chairman as co-chairmen, with the executives as members.