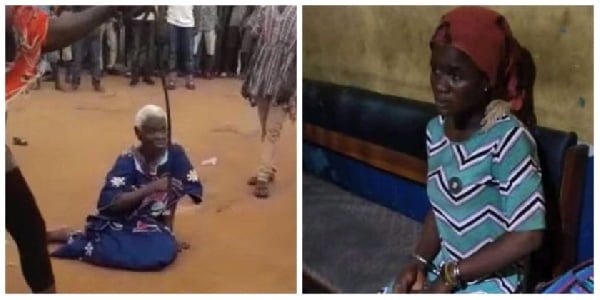 I was unaware of my actions - suspect in Kafaba lynching confess

One of the two women spotted in the video on the lynching of the 90-year-old woman to death at Kafaba has confessed upon arrest that she was unaware of all that happened on Thursday, July 23.

According to Latifa Bumaye, she realized what happened after, when she chanced upon a video of the incident on TV3.

“I was not aware of what happened, I saw it on TV3 and I quizzed if that was me and they responded in the affirmative,” the young woman she confesses in a video.

Latifa who also revealed that the old Akua Denteh was her grandmother, said the soothsayer might have enchanted her through a young man she works with.

“I was at home when the soothsayer’s boy came and held me and did something on me,” she said.

Prior to that, Latifa said she went dumb at the riverside where she was washing together with one other person.

Latifa Bumaye, together with a soothsayer, Hajia Filina on Thursday, July 2, led some members of the Kafaba community in the East Gonja Municipality of the Savanna Region to lynch to death, 90-year-old Akua Denteh over an allegation of witchcraft.

The community brutally assaulted the aged woman after a soothsayer, Hajia Filina alleged that Akua Denteh was a witch and spiritually responsible for lack of development in the area.

The development had attracted condemnation from Ghanaians including the president and some high profile personalities in the country.

Civil society organizations have also sworn to seek justice for the old woman who lost her life in the hands of her own people.

Five persons have been arrested in connection with the incident and remanded in police custody by the Bole District Court.