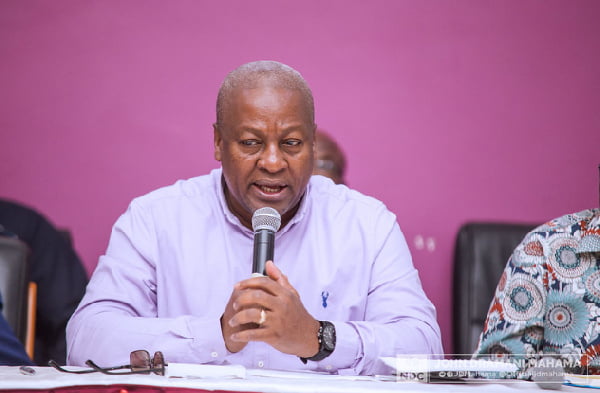 Flagbearer of the NDC, John Mahama

The flagbearer of the NDC John Mahama has assured Chiefs and People of Wa that he would broaden the employment opportunities in the region as well as improving upon the healthcare delivery in the region.

Speaking at the forecourt of the Wa Naa’s Palace as part of his four-day campaign tour of the Upper West Region, Mr. Mahama stated that when he is elected into office he would provide funds to aid the construction of the new Upper West Regional hospital that would immensely boost health care service in the area.

He added that he would revitalize and improve infrastructure at the abandoned Wa Municipal Hospital and construct polyclinics within key communities in the region to reduce the huge backlog at the municipal hospital.

Mr. Mahama said he would also dualize the road from Bamahu to the Wa Airport which forms part of the trans-ECOWAS trunk of road connecting the region to neighbouring Burkina Faso and Mali.

“I will also provide 250,000 jobs to the youth in the country ranging from agribusiness, Forestry, construction, and artisans among others,” he stated.

The Overlord of Waala traditional Kingdom Naa Fuseini Seidu Pelpuo noted that the era of juicy promises delivered in flowery language and enhanced by ridiculous token gifts in electioneering is fast becoming a thing of the past and is being replaced by evidenced-based campaigns.

Naa Seidu Pelpuo said Ghanaians were now perceptive and would not be swayed by flimsy promises and would make thought-out decisions based on the previous decisions and policies brought out by various political parties and politicians.

He however added that the people of Wa Central recognised the numerous developmental projects his administration made in the constituency during his tenure in office as President.