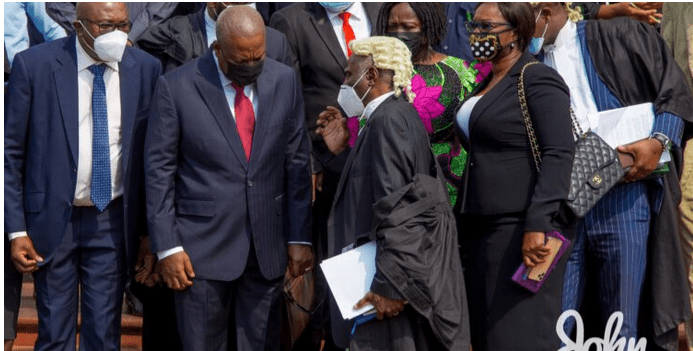 The flag bearer of the National Democratic Congress(NDC) and Petitioner in the ongoing 2020 election petition, John Dramani Mahama, has filed a stay of proceedings at the Supreme Court to halt the hearing of the case.


With just three days into the hearing, the legal team wants the apex court to halt its hearing on grounds that it first makes a determination of Mr Mahama’s review application filed on Wednesday.

A stay of proceedings is an order to stop or suspend a proceeding or trial temporarily or indefinitely.

The former President, who is challenging the result of the 2020 presidential election, wants the court to reconsider its decision not to allow Mr Mahama’s legal team to drag the EC Chairperson, Jean Mensa, to the witnesses box to answer questions that it says underpins its case.

In a flurry of exchanges on Wednesday between Mr Tsatsu Tsikata, lead Counsel for Mr Mahama, and some panel members of the Supreme Court, the jurists said Mr Mahama’s review application did not constitute a stay of proceedings.

The court, therefore, waved on the parties to file their witness statements as it closed the chapter on case management–a procedure that allows the court to narrow down specific issues for hearing as well as the timeliness.

The petitioners were directed to file their witness statements by noon Thursday, January 21, 2021.

READ ALSO:  Over 96% of funds from collapsed Banks already paid in full to customers

But it appeared they had another legal gymnastics up their sleeves as they rather filed a stay of proceedings.

A court may decide to lift the stay and continue the proceeding. Some stays are automatic, but others are up to judicial discretion.

The stay of proceedings comes after the apex court dismissed an application that sought to order the Electoral Commissioner to specifically respond to questions regarding anomalies that characterised the December 7, 2020, elections.

In a unanimous decision, on the preliminary issue, the apex court presided over by Chief Justice Kwasi Anin Yeboah said the court rules had been amended with respect to interrogatories.

Interrogatories are a formal set of written questions propounded by one litigant and required to be answered by the opposing party or parties in order to clarify matters of fact and help to determine in advance what facts will be presented at any trial in the case.

The Chief Justice said the new regime did not afford the court the laxity of time to respond to allow such questions to be answered before the trial begins.

The court explained that “reference was made to the 2013 [presidential election] petition in which an application for interrogatories was granted by the Supreme Court.

“However, subsequent to 2013, several statutory amendments have been made by C.I. 99 of 2016 which has restricted the practice and procedure of this court as regards Election Petition.

“Indeed, Rule 69 of the Supreme Court amendment in C.I. 99 directs the expeditious disposal of petitions and sets timelines for this court to dispose off the petition. The amendments provide us [court] with new procedural regime and strict timelines.

“We are strictly bound to comply with C.I. 90 and therefore we will not apply Order 22 of C.I. 45 of 2004 in this circumstances. We, accordingly, refuse to grant the application and same is accordingly dismissed,” the court said.

It was the case of the apex court that the petitioners simply wanted to delay the process.

The dissatisfied Mahama team filed a review on Wednesday but the court declined to rule on it but said it would incorporate it decision in its final judgement.

Meanwhile, the Supreme Court on Wednesday announced the roadmap for the election petition hearing that will determine if President Nana Akufo-Addo was duly elected.

In setting out the timeliness, it said it would not tolerate time-wasting as it took a cue from the 2012 election petition which travelled for more than eight months.

The roadmap announced will see parties making their case to determine if indeed there were some anomalies with the results that saw the NPP presidential candidate emerging winner of the 2020 polls.