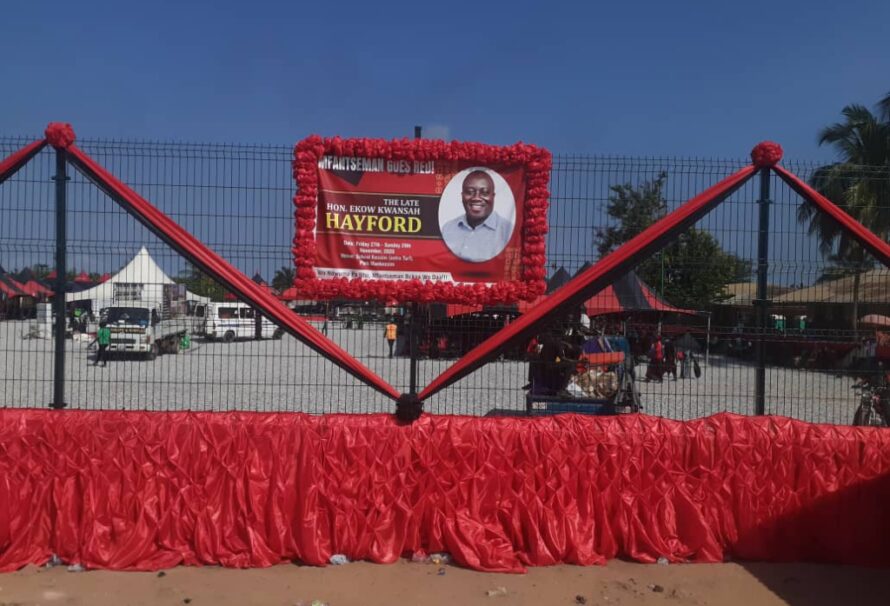 The murdered Member of Parliament for the Mfantseman Constituency, Ekow Quansah Hayford has been laid to rest.

The MP was laid to rest on Saturday, November 28, 2020, after a farewell ceremony was held in his honour at the Mankessim Town Park in the Central Region.

TV3 report, the funeral ceremony of the New Patriotic Party MP, who lost his life in an arm robbery attack was heavily attended by high-profile delegations from Parliament, government, and the NPP fraternity.

Dignitaries present were the President Nana Addo Dankwa Akufo-Addo, his Vice, Dr. Mahamudu Bawumia, the Minister of Trade, Allan Kyeremanteng, the leadership of the NPP, supporters, and sympathizers among others.

In a tribute, his wife, Ophelia Hayford said she and her children were proud of the late MP because he made them proud adding that he would be missed greatly.

Another from the NPP and Parliament said his loss was a great loss to the party and the country as a whole.

Five suspects have been arrested in connection with his murder and are currently assisting the Ghana Police Service in its investigations.

Meanwhile, his wife, Ophelia Hayford, a stuff of the Ghana Police Service was selected by the New Patriotic Party to replace him.

She has since tendered her resignation letter to the Service and begun her campaign towards the December 7 polls.