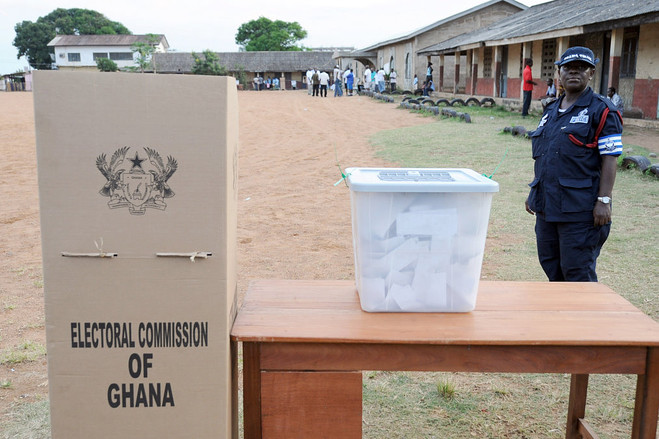 The Central Regional Police Public Relations Officer, DSP Irene Oppong has debunked media reports that one person had been shot dead at Awutu Senya West constituency for attempting to snatch a ballot box at the Obrakyere polling station.

According to her, no shooting incident had been recorded at the said constituency, neither was the young man in question dead as reported.

“There was no shooting at Awutu Senya West constituency, we have called all the polling stations to confirm if there was any such incident and there was none recorded”.

DSP Irene Oppong made the clarifications in an interview with TV3’s Elections Command Center a few minute ago.

She explained that the police were informed of some disturbances in the said polling center and the young man was found in a pool of blood and unconscious upon their arrival.

He was subsequently, sent to the Agona Swedru hospital where he is currently receiving treatment.

She also indicated that the police cannot confirm that the incident was associated with ballot box snatching since non of their officers on the ground have been able to confirm the occurrence of such in any of the polling stations within the constituency.

DSP, Irene Oppong said the police would be able to ascertain what actually happened when the young man gains consciousness.

However, the DSP confirmed the shooting at the Awutu Senya East in which two-person sustained injuries.

According to her one of the victims has been treated and discharged while the other is still undergoing treatment at a facility in the constituency.

The Ghanaian media reported on Monday evening that one person had been shot dead at the Awutu Senya West constituency in the Central Region for attempting to snatch a ballot box after the closing of polls.

The young man whose identity was yet to be established, the report said died instantly at the Obrakyere polling station where he had attempted to snatch the ballot box after the police opened fire on him.

Two injured in a shooting incident at Awutu Senya East

The incident reported to have occurred at the same polling station in which the Member of Parliament, and Minister for Special Development Initiative, Hawa Koomson admitted to having fired a warning shot during the voters’ registration, report said was targeted at the NDC’s, Parliamentary candidate for the area; however, he escaped unharmed.

The two who sustained injuries were currently receiving treatment at a medical facility in the area.