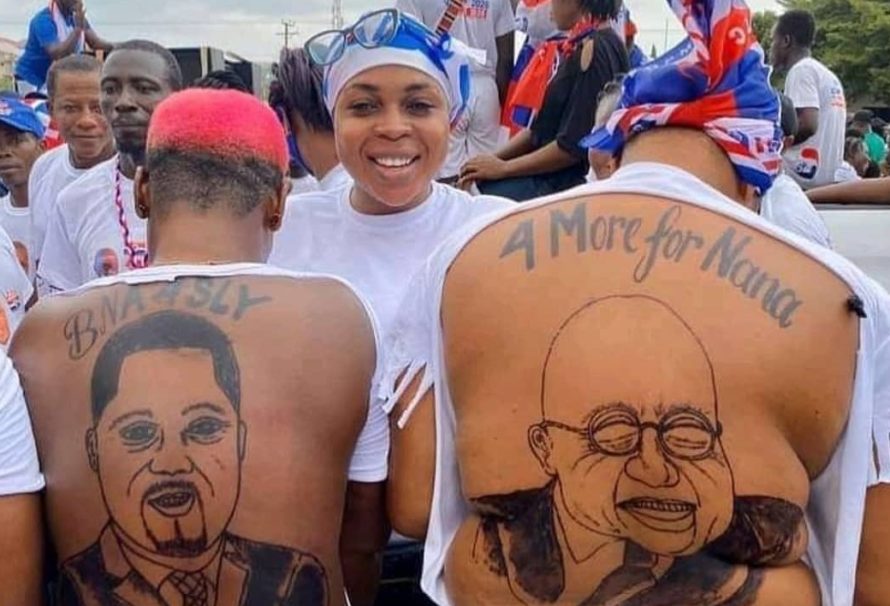 It is becoming a very common trend in Ghanaian body politics today for supporters of political parties to tattoo pictures of their favourite candidates on their bodies for solidarity.

Some few months ago a young woman believed to be an ardent supporter of the opposition National Democratic Congress (NDC) tattooed the ex-president and flag bearer of the party, John Dramani Mahama at her back just to show her support for the president, wishing for his comeback after he lost the bid to continue another tenure during his presidency.

Today, two women believed to be supporters of the ruling New Patriotic Party (NPP) have been spotted on social media with the same.

The one with the tattoo of the president had the 2020 slogan of the party “4 more 4 Nana” on top of the tattoo with his usual bold smile and round spectacles that characterized all of his pictures and his public appearances and also in suit and tie.

Sly’s tattoo, on the other hand, had the slogan, BNA 4 SLY boldly scripted at the top and with his mouth opened believed to be forcing out a smile.

Information gathered by GhanaPlus.com revealed that the two tattooed were made either in June when Sly launched his campaign or just a few days ago ahead of Vice President Mahamudu Bawumia’s visit to the constituency yesterday.

Although social media was able to recognize the tattoo on the lady’s back as that of Nana Addo Dankwah Akufo-Addo, they were of the view that the artist could have done a better job.

According to them, it takes only an artist from the opposition side of the political device to do a tattoo of such nature of the president, especially, with his cheeks which they say looked swollen.

GhanaPlus chance upon some of the comments on IG and this is what they had to say,

suzzy.2230 added that “Oh bɛt where did Akyem Sakawa Mafia go wrong to deserve this pic? The tattoo artist is a NDC pɛɛ🤣. Nana afono ajɔgɔ 🤣🤣🤣”

Another who goes by the name qheeyharh.larry said “No nana must arrest the artist 🤣🤣I mean Addo is ahoufe na who’s this 🤣🤣”