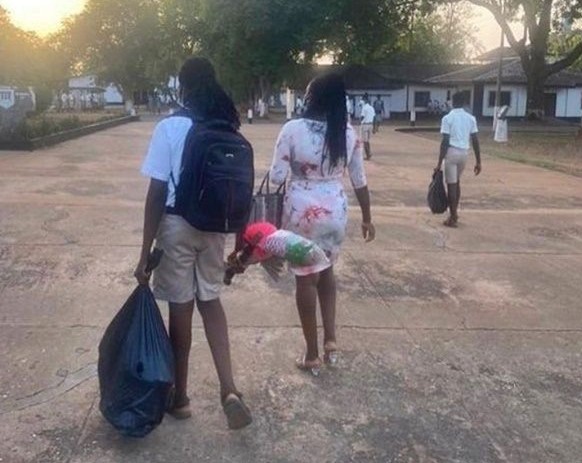 Oheneba Nkrabea given a warm welcome at Achimota School

The parents of Oheneba Nkrabea, one of the Rastafarian students who was initially denied admission to Achimota School have confirmed that he was given a warm welcome when he reported to the school Thursday morning.

The mother of the student Madam Maana Myers said he was welcomed on campus by the Day Students School Prefect.

She said the Prefect also said Oheneba was going to be her student during his time at the school.

“It was the day students prefect who approached us in a very warm and nice manner and asked Oheneba whether he was a day student or a boarder and she said you are going to be our school son.

She said the Prefect also gave the assurance that “nobody was going to do anything to him and if he had any problem, he should just approach her”.

Madam Myers said the words of the prefect were very reassuring.

Delivering the judgment on the case of two Rastafarian boys, Justice Gifty Agyei Addo held that the Attorney-General failed to provide a legal justification as to why the rights of the two Rastafarian students to education should be limited on the basis of their dreadlocks.

Tyrone Marhguy and Oheneba Nkrabea were denied admission into Achimota School for refusing to shave off their dreadlocks notwithstanding that they had passed their qualifying examinations, and, had been selected into the school through the computerized placement system.

The school through the Attorney General argued in court that allowing the students into the school will have dire consequences on the school’s discipline, health, tradition, and community cohesion.

The Attorney General subsequently argued in Court that the Rastafarian students had not even completed or returned their acceptance of admission forms and could thus not be deemed to have been denied the admission.

But for the students, their parents, and lawyers, this was simply a case of a breach of fundamental rights on the basis of their religion and religious practices.

Justice Gifty Adjei Addo disagreed with the submissions of the Attorney and granted all the reliefs separately sought by the students, save for the relief of compensation in the case of Tyrone Marhguy.
According to Justice Addo, it is preposterous for the Attorney General to have even suggested that the two were not students in the first place.