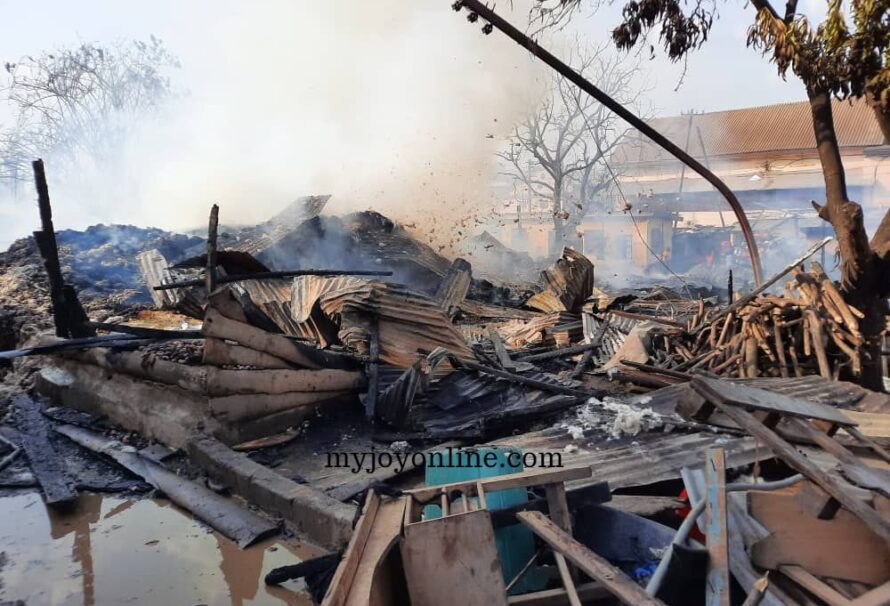 One person has been found dead after a fire destroyed parts of Asafo BB slum in Kumasi, in the Ashanti Region, on Sunday, May 2.

The inferno is believed to have been started by a couple cooking in one of the wooden shacks in the area.

The Police and fire service who rushed to the scene to help put out the fire discovered the charred remains of the victim.

Speaking to JoyNews, one of the fire service personnel said that the area is known for pillow production thus the cotton used in the process ignited the flame.

DO 1 Rashid Issaku said that “at 14:43 hours we received a distress call from the Divisional Command that there was an outbreak of fire behind Cocobod. So immediately a fire engine was dispatched.”

“But, when the fire engine came, we realized that one fire engine was not enough, we called for two more. So far we have managed to get the fire under control and the fire has finally been extinguished.”

The deceased was identified as an 18-year-old driver’s mate whose name is given only as Nana Yaw.

A relative of the deceased, Afua Pokuaah, who arrived few minutes after the charred body of the teenage boy was conveyed from the scene could not control her tears.

She told JoyNews’ Nana Yaw Gyimah that the deceased, who originally lived at Atonsu, ignored all advise against living in the slum.

READ ALSO:  You suddenly found your voice when the question of hair, hijab, religion and faith came up, talk about the text books – Johnnie Hughes tells Teacher Unions

Meanwhile, due to the magnitude of the fire, over forty shacks that were occupied by several families have been consumed by the fire.

The residents said that the fire has destroyed every property they own including huge sums of money.

Nana Yaw Gyimah reported that many of the affected persons are head porters and/or have menial jobs who are trying to find a new place to pass the night following the fire outbreak.