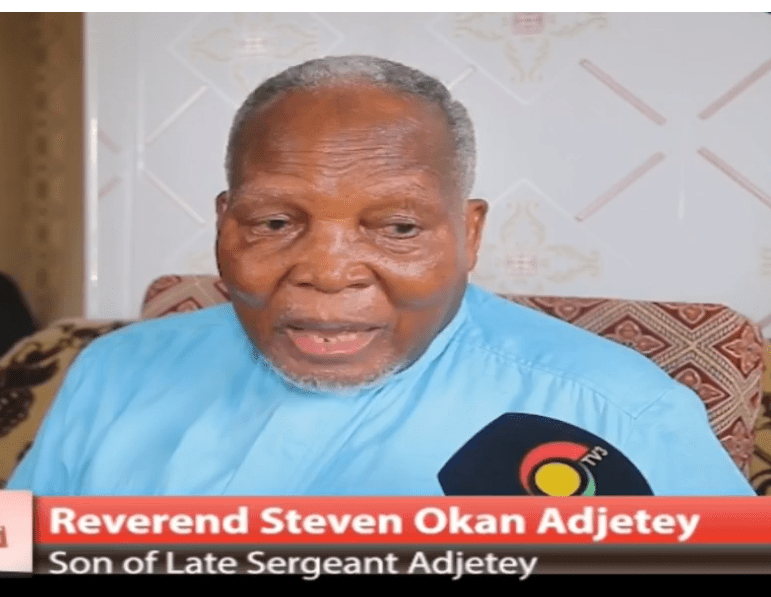 The children of the late Cornelius Francis Adjetey , popularly known as Sgt Adjetey, one of the three ex-service men who lost their lives in the 1948 Christiansburg Castle cross road shooting has called on the government to pay them the gratuity due their father.

The first son of the late astute solider, Rev Steven Okan Adjetey who spoke to TV3 said paying them the gratuity would help the family very much.

“The gratuity that was due my father, I wish it could be given to we, his children, because we feel it is really necessary”.

Rev Okan Adjetey spoke to the television station in a documentary titled the “Unarmed Soldier,” aired on Thursday March 18 and monitored by GhanaPlus.com.

According to him, the country had not celebrated their father and his colleagues enough for their contributions which eventually spark the national agitations which lead to a surge in the country’s quest for independence.

“If by now, right from Nkrumah’s time, the Presidents have been able to think of my father and his colleague that would have helped us very very much”.

He bemoaned the lack of recognition adding that the family would appreciate very much if the government would recognized for the father’s contribution the the country going forward.

“That recognition is not there at all. If in national independent celebrations and what not if you recognized us we will be very very glad,” Rev Steven Okan Adjetey he added.

The three ex-servicemen and the Christiansburg Cross road shooting

The three ex-servicemen, Sergeant Adjetey, Corporal Attipoe, and Private Odartey Lamptey met their untimely dead when the British Police Superintendent of the Gold Coast Police Force, Sir Colin Imray opened fire on them on February 28, 1948, during a peaceful march to present a petition to the Governor of the Gold Coast, Sir Gerald Creasy

The members of the Gold Coast Regiment were among other things petitioning the governor over their gratuities having fought alongside the British troops in the Second World War.

February 28 this year marked 73 years since the incident happened.