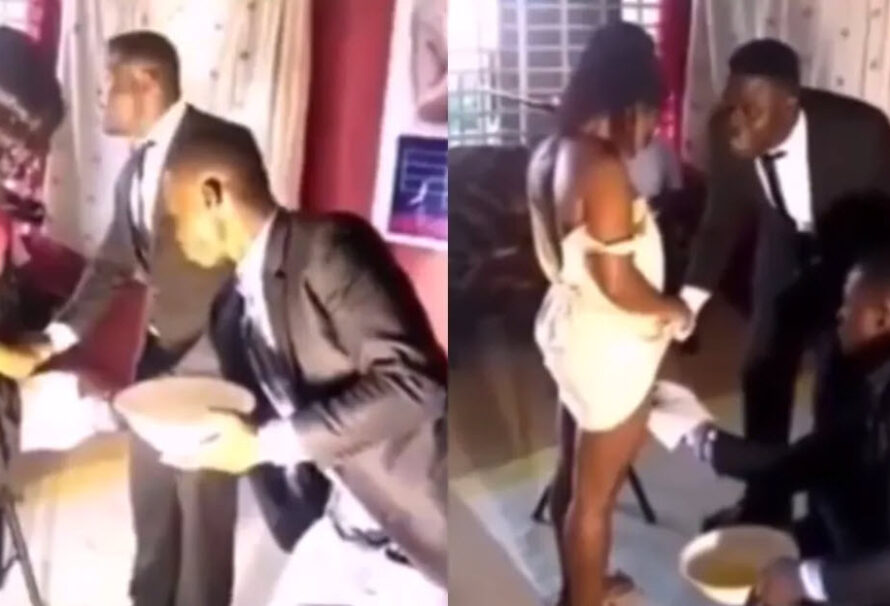 Ghanaians, on Monday, October 12, 2020, woke up to an abhorring video in which a man of God believed to be operating in some part of the country shaved private part of women in his church during church service.

The practice believed to have been adopted by the man of God during a three-day deliverance service saw two women being shaved by the pastor with a shaving stick and being assisted by another man with tissue paper in which the shaved hair was collected.

The practice which the pastor reference from Leviticus in the bible has since received backlash from the general public with many describing it as shameful and an embarrassment to Christianity as a whole.

GhanaPlus.com came across some of the reactions by Ghanaians on social media and we bring you some.

Read some of the comments below:

“
Daniel Kudedzi
“This is a movie titled “Pastor blinks”. It’s not real.”
Joseph Nyanzu
“Am sorry for the life of these ladies. Where exactly are they going with ur so-called shaving hairs. What are they going to used it for. Moa gyimi dodo”
Vincent Alornyo
“Is only foolish ladies that will allow themselves for this stupid act.”
Mercy Adu
“They are all acting, he does that to create awareness to how gullible some people can be”
Maame Awo Afia Kwakyewah
“This is very serious..omg..this is how those fake men of God have reduced Christianity into..aaaa…”
Michael Asante
“This series is degrading the body of Christ.”
Richard Boateng Okraku
“This is a movie. Is he mad or he’s trying to be mad. In fact, he’s MAD!!”
Quami Paradise
“I think it’s a movie Cox if this is real then I think we need to search for this man and beat him”
Facebook Twitter LinkedIn Pinterest WhatsApp Telegram
Follow us on Facebook: TheGhanaPlus | Instagram: @GhanaPlus | Twitter: @TheGhanaPlus
DO YOU HAVE A STORY TO SHARE? CLICK HERE to Submit online,
or WHATSAPP on +233 242 92 42 30,
or EMAIL: [email protected]