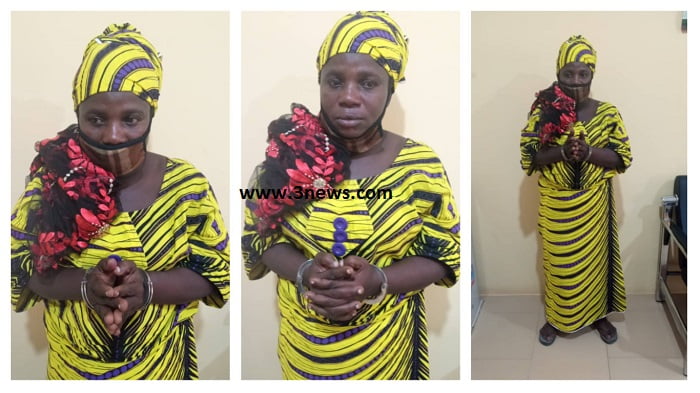 The soothsayer who led the lynching to death of the 90-year-old Akua Denteh of Kafaba in the East Gonja Municipality of the Savannah Region has been arrested.

The soothsayer identified earlier as Hajia Filina was arrested at Yeji in the Bono East Region by the Makango police after a manhunt for her arrest about two weeks ago.

Hajia Filina is one of the main suspects in the attack that claimed the life of the 90-year-old on July 23, after her own community lynched her over an allegation of witchcraft.

Her arrest brings to eight (8) persons arrested in connection with the incident.

The 90-year-old Akua Denteh was reported to have been lynched to death on Thursday, July 23 after the soothsayer, Hajia Filina pronounced her a witch and brain behind the communities predicament of lack of development.

A video shared by 3news.com, who first reported the incident, showed two women, namely, Hajia Filina and Latifa Bumaye, a granddaughter of Akua Denteh, assaulting her with an object, one of which looked like a belt with scores of community members cheering them on.

Confession by one of the suspect

Latifa Bumaye in a confession after her arrest has indicated that she was unaware of her actions on the day, blaming it on spiritual enchantment by the soothsayer and a young man who works for her.

“I was not aware of what happened, I saw it on TV3 and I quizzed if that was me and they responded in the affirmative,” the young woman she confesses in a video.

READ ALSO:  Nadia Buari wants to be in coma to hide from her life

The attack has received widespread condemnation from Ghanaians, including the President, Nana Addo Dankwa Akufo-Addo.

Akua Denteh was buried on  July 25,  after an autopsy was carried on the body at the Tamale Teaching Hospital.

3news report that tears flowed at the burial ceremony held in her honour at Kafaba.