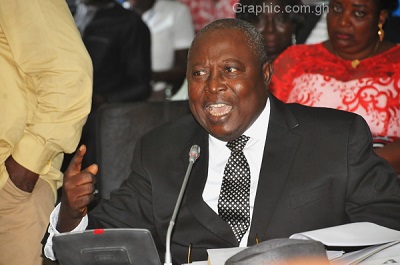 Stop tempting me to speak; it will not be in anyone’s interest

The former Prosecutor Mr Martin Amidu has sent a strong warning to persons rooting for their preferred candidates to be selected as the next Special Prosecutor not to tempt him to speak with their propaganda.

According him, tempting him to speak would not be in the interest of anyone.

“By all means let anybody root for his or her preferred Special Prosecutor as an insurance against prosecution for corruption in Government but leave me out of the propaganda. I am honouring an undertaking by my silence in not commenting on public affairs. Stop tempting me to speak by the defaming propaganda against me. It will not be in anyone’s interest,” he said.

Mr Martin Amidu made the comment in a statement dated April 29 and titled “Do not defame me in the propaganda to nominate a new Special Prosecutor”.

His comment was in responds to a publication by Asaase Radio on reasons of his resignation.

“The post on the Asaase Radio online website by one Wilberforce Asare states in respect of  my resignation that: “His [Martin Amidu] reasons for resigning were roundly criticized by  civil society actors, who maintained that the law offered him enough protection to stay in  office and perform his duties without interference and that there was no clear evidence of any  executive interference that should have triggered his resignation.” Asaase Radio and its alter  ego did not have the courage to point out one civil society actor who expressed the  fabrication it was putting out to the public to aid the appointment of its new surrogate and  preferred “Agyapa” Special Prosecutor”.

“Asaase Radio also shamefully pretended not to have read my rejoinder giving further and  better particulars on my resignation dated 26th November 2020 to the Secretary to the  President’s supposed reply to my resignation letter which we now know by experience that  the President might not have instructed to be written at all. My functions or my judgment and  decision as the Special Prosecutor to resign my office under Act 959 was not subject to the  supervision or judgment of civil society actors let alone those of them who secretly attend  Government policy making meetings as I had occasion to pointed out in writing previously,” he wrote.

He was of the view, the radio station and its online platform published the said article to aid its surrogate, Kissi Agyebeng, a friend and a coarse mate to the owner of Asaase radio, Gabby Otchere Darko as the Special Prosecutor.

“In exercise of brazen impunity, Asaase Radio reported online a matter which never featured in my resignation for pure political propaganda to facilitate and enhance the status of its surrogate “Agyapa” Special Prosecutor even before the President could indicate his acceptance of the nominee and forward a request to Parliament. What has the nomination of a Special Prosecutor by the Attorney General which was awaiting the pleasure of the President”.