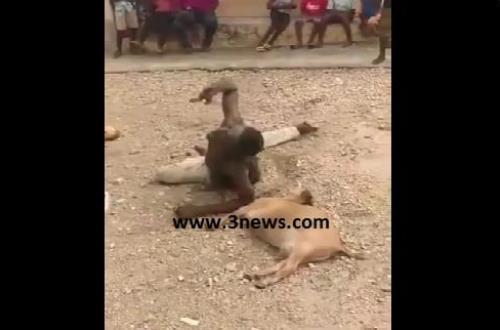 An alleged goat thief, identified as Abombi has been beaten to death at Ayigbe Town, a suburb of Nsawam in the Eastern Region.

Fact from the Nsawam Police said on April 1, 2021 at about 3:00pm, the deceased was arrested with a suspected stolen pregnant goat by some unidentified persons.

The chief happens to be the owner of the goat.

Police say information gathered indicated that on arrival, one WO I Adjona Henry, aged 50 years, who is the chief’s driver, subjected the deceased to severe beatings by whipping him with a rope and also stepped on his chest and neck.

READ ALSO:  Medikal shoot down TeePhlow’s beef, you can’t afford to pay me enough to react

The deceased became weak and was released to leave the palace.

He managed to walk away to a spot at a railway crossing but was found dead the next morning at that same spot.

The chief and his driver have been arrested and detained in police cells to assist in investigation.