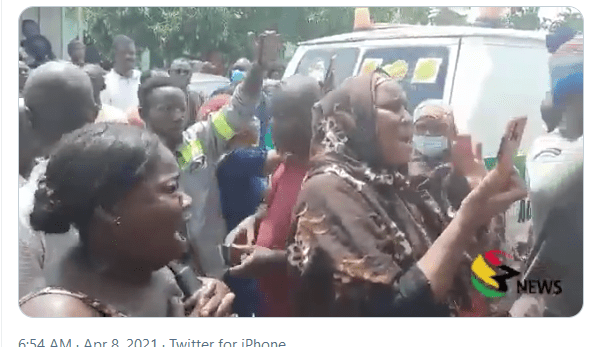 The mortal remains of the 11-year-old boy, who was gruesomely murdered by his friends at Kasoa, Lamptey Mills for money rituals has been laid to rest in accordance with Islamic tradition.

A video report by 3new.com  shows scores of mourners who throng the resident of the decease wailing uncontrollably as his mortal remains were being conveyed from an Ambulance for burial right.

📌Body of murdered 11 year boy, Ishmael moved from hearse into the house for rites.

Ishmael Mensah Abdallah was murdered by his teenage friends at Kasoa over the weekend for what they confess to the Central Regional Police was for money rituals.

The two suspects Felix Nyarko, 16, and Nicholas Kiki, 18, told the police after their arrest that the spiritualist demanded a human being as well as ¢5000 in exchange for riches.

In their bid to meet her demand, the duo admitted to the police that they killed Ishmael Mensah Abdallah, a family friend of the first accused, Felix.

The fetish priestess has since been arrested by the Police assisting in the investigation into the matter.