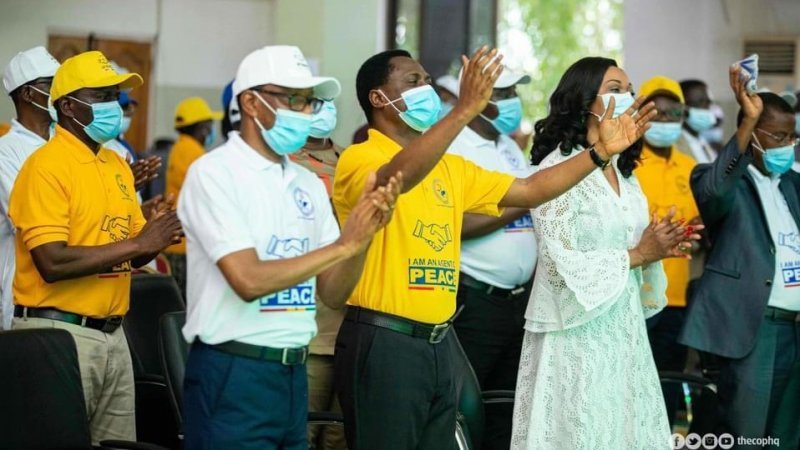 The Electoral Commission Chairperson, Madam Jean Mensa, has reiterated that the utmost concern of the EC was the pursuit of peace before, during, and after the 2020 General Election.

“We are aware that this year is an essential year due to the elections. And our actions come December 7 will determine the fate of the nation as such we have cautioned ourselves so that our actions and words should leave a lasting and positive impact on our dear nation,” she said

She made this remark at the launch of the Agent of Peace campaign by the Church of Pentecost (CoP) in Greater Accra.

The Agent of Peace Campaign is an initiative of the CoP to educate and challenge Christians, to be agents of peace as the nation prepares towards Election 2020.

The EC Chair stated that the EC has made itself as an agent of peace to the nation and the world and aims to hold a credible, transparent, and peaceful presidential and parliamentary elections.

Adding that the stance followed a promise she made with God years ago that she would avail herself to serve Him with her time, treasure, and talent.

Mrs. Jean Mensa noted that the Commission, in aiming to build trust, confidence and integrity in the electoral processes, had set up programmes including “Let the citizens know” to provide ample opportunity for the EC to engage directly with the citizens through its media partners.

She added that it was essential that each citizen, especially the youth, owed a duty to the country to be agents of peace and security and pleaded with journalists to perform their duties and the fourth arm of government.

“As the gateway to information, it falls on you to be modest and truthful in delivering information and to use your respective platforms for good and not to mislead the public,” she added.

Apostle Eric Nyamekye, Chairman of the Church of Pentecost speaking at the event said the country had seen seven successful General Election, and many by-elections and it was the duty of every stakeholder to make plans to uphold peace.

“As we move towards the 2020 elections, we must retain hope that the Lord will bring peace to the nation, however that would only be possible if we as a nation also yearn for peace and work hard to protect it,” he stated.

Apostle Nyamekye further cautioned political party supporters, especially, the youth to refrain from using harmful and distasteful words and to desist from engaging in meaningless arguments.