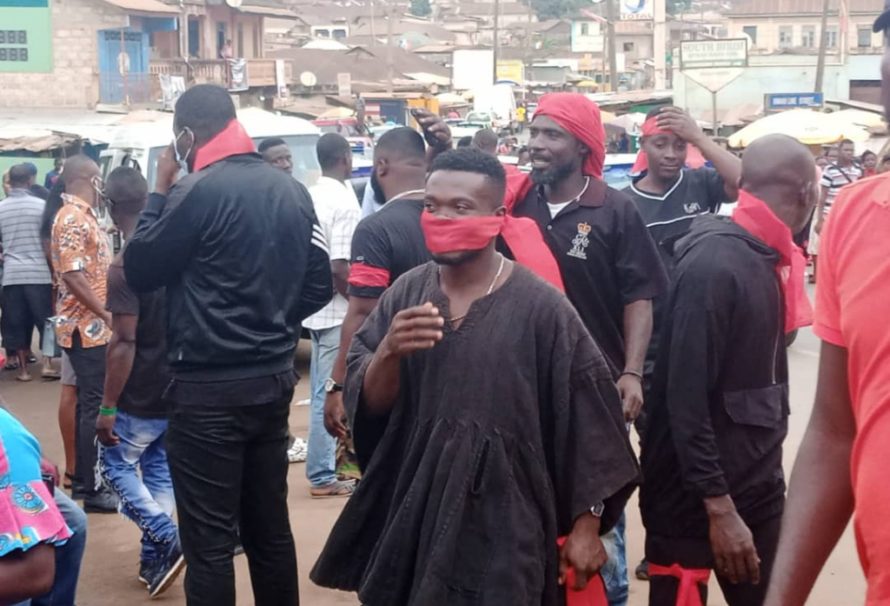 Thousands of natives of the Akyem Abuakwa Traditional area in the Eastern Region of Ghana have taken to the street to register their displeasure against the former President Mahama’s “Akyem Sakawa Boys” post shared on his Facebook page about a week ago.

The post which was made in connection with the controversial Agyapa deal, the indigenes said was ethnocentric and called on the former president to apologize or risk being banned from campaigning in the area in his ongoing political campaign tours.

The angry natives also threatened to pelt the ex-president and leader of the largest opposition party in the country, the National Democratic Congress (NDC)’s flag bearer with stones if he steps his foot in the area without the apology.

The Asamankesehene, Barima Kesse Bediako III in an interview said the National Democratic Congress (NDC) and the former President would be banned from holding any political campaigns ahead of the December elections in the Akyem Abuakwa Traditional area if he fails to render an unqualified apology to the people.

The former president, John Dramani Mahama on August 31 shared post a by the Bolgatanga Central Constituency MP, Isaac Adongo in which the MP described the Agyapa deal as a “big fraud by the president and his Akyem Mafia’s”

“Agyapa Royalties deal is a big fraud on Ghana by President Akufo-Addo and his Akyem Mafia’s” an introduction to the piece titled “Agyapa Royalties Fraud Is The Last Straw: The Akyem Sakawa Boys and Grandpas Must Go” shared by Mr. Mahama reads.

Sharing the post which contained the derogatory words usually used for fraudsters, the ex-president wrote “An interesting piece from Hon. Isaac Adongo on the Agyapa Deal”

The post has since received backlash from Ghanaians including the president who expressed his anger over the comment in a meeting with the Catholic Bishops last week.

On the streets of Akyem Abuakwa this morning, the indigenes, made up of chiefs and resident clad in black and red attire marched through the principal streets to demand an apology from the ex-president.

In their hands were placard with inscriptions such as “No Buga Buga Politics“, “Akyems Saved Ghana”, “Ghanaian Rejected NDC+ Mahama”, “Mahama is Shameless” among others.