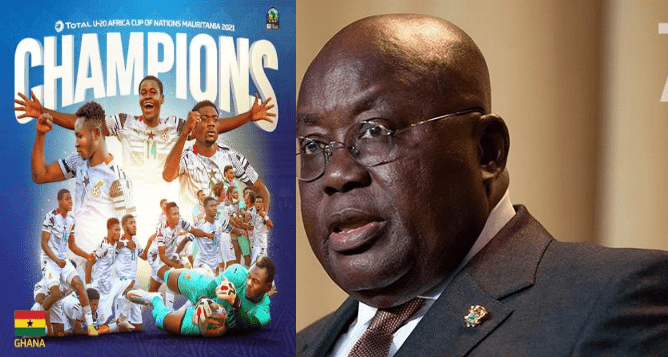 The President of Ghana, Nana Addo Dankwa Akufo-Addo has congratulated the Black Satellite of Ghana for winning the  U-20 Africa Cup of Nations.

The team lead by Couch Abdul Karim Zito, on Saturday, March 6, a day marking 64years since Ghana’s Independence from the British, secured a 2-0 victory over their Ugandan counterpart to clinch to the coveted title trophy for the fourth time.

The competitive march was held at the Stade Olympique de Nouakchott in Mauritania and comes 12year after since the team won same.

Reacting to the win, the President, Nana Addo Dankwa Akufo-Addo has taken to his Facebook page to congratulate the Black Satellite for the victory.

He described the win as thoroughly deserve victory and added that the team had made Ghana proud.

He noted he can’t wait to host the team at the Jubilee House to celebrate their great victory which fell on the day Ghana gain its freedom from its colonial masters, the British.

Sharing a picture of the team, the President wrote,

“Congratulations to the Black Satellites for winning Ghana’s 4th AFCON U-20 trophy. Thoroughly deserved victory, and they’ve made Mother Ghana proud. What a way to celebrate our 64th Independence Anniversary!! Kudos to the team, and I look forward to receiving the playing, technical and management teams to Jubilee House”.