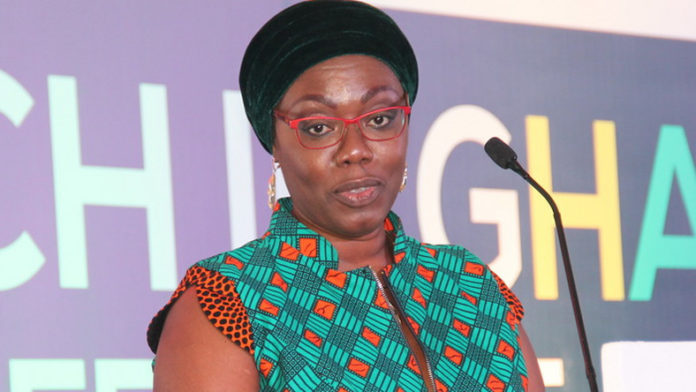 The Minister of Communications, Ursula Owusu-Ekufo has said the National Democratic Congress and its Parliamentary Candidate, John Dumelo will never win the Ayawaso West Wuogon Constituency adding that it would only be a good resume achievement for the actor.

The Member of Parliament for the Ablekuma Central was speaking in an interview with Asempa FM in Accra sighted on social media by GhanaPlus.com.

According to her, the Ayawaso West Wuogon seat had always belonged to the New Patriotic Party, and the only time the NDC won, the elections were rigged.

“The only time the NDC won Ayawaso West Wuogon Constituency, the elections were rigged, the evidence is there, Rebecca Adotey’s time, they rigged the elections, the case went at the Supreme Court but because NDC was in power, the case was delayed for four years in court but the court ruled in favour of the NPP’s Isaac Amoh”.

The astute member of the ruling NPP said her party would win the seat with less stress because the MP for the area, Lydia Seyram Alhassan had worked hard for it.

She again indicated that the NPP would win all of its strongholds and invade that of the NDC also in the December 7, elections.

The two have even become more popular following a foil 3FM Constituency Debate some weeks ago in which the actor had gained more public sympathy.

Additionally, the Ghanaian entertainment industry had been divided between the two with the majority of them rooting for the incumbent MP and the NPP as against their colleague actor, John Dumelo.