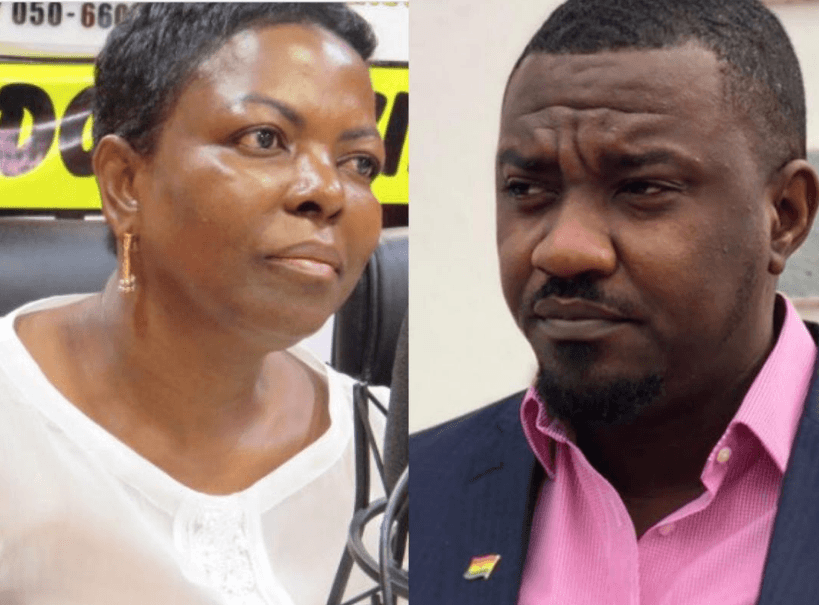 Actor and NDC’s Parliamentary Aspirant of the Ayawaso West Wougon, John Dumelo seem to have scored more political point and gain more supporters following a brawl between himself and the Member of Parliament for the area, Lydia Seyram Alhassan during 3FM Constituency Debate.

The much-anticipated 3FM between the major political opponent, the NDC and NPP, together with two others came off on Friday, November 27, 2020, at the Santana Market in Accra.

However, a supposed unfair comment by the MP for the area, Lydia Seyram Alhassan who arrived at event way behind time, brought an abrupt end to the debate.

The debate, a flagship programme by 3FM, a subsidiary of Media General was to accord the political parties the opportunity to interact with the constituent, their policies and programmes when voted into power.

The programme was running smoothly until the arrival of the MP whose choice of words infuriated the actor and NDC aspirant.

The MP in answering a question used the word ‘Badwenba’ to wit “Sensible Child” in the Fante dialogue which did not go down well with Mr Dumelo infuriating him in the process and requested the MP to withdraw it subsequently.

“If you are sensible child, when you are doing something, you think about it,” she said in response in a question on why she stopped the actor from drenching a gutter.

However, Ms Alhassan did not withdraw the word, a development Mr Dumelo did not take lightly and attempted to leave the premises but for the intervention of the host.

Public Image of the two

The development has got the admirers of the two talking since the two had always painted a beautiful picture of peace and harmony to the admiration of many.

It could be recalled that not long ago the two were spotted on a peace walk together, while in another, the two were on a platform together with the actor turned politician John Domelo kissing the back of the MP’s hand.

Ghanaians react to the brawl

Their admirers have since reacted to the development; most of the argument however in favour of the actor who they said they believed deserve an apology from by the MP over the choice of words.

GhanaPlus came across some comments and this is what they had to say;

Tunchy_18 @_mrGborsi wrote  “If you think men in power are abusive try women.. I think she is not cultured.. what a disgrace… @johndumelo1 Voter for  @johndumelo1”

AMA @Priscilla_afri “That Ayawaso Lydia does not qualify to be called Maa.. how can you insult someone who’s helping you… John Dumelo deserves apology”

Vine De Amicus aslo said  “When insults and violence become the norm instead of the exception, it means one has come to the end of his creative ability. At this level, just smile, because, you’re a winner”.
Anumah De Priest Nelson indicated “Dumelo just trapped this woman and got her. All my votes goes out to you my brother. Anyways I have just been reminded by the EC that is not all my votes but rather my vote.. I love Ghana”.
Seyram Delight Hortor “When your opponent is winning and you have no choice than to use insults . Dumelo all the way . Seyram going to lose big”.

You came 2 hours late to a debate and used your 15mins allocation to say I don’t have sense? I’m impressed….. pic.twitter.com/wdwidunv6c