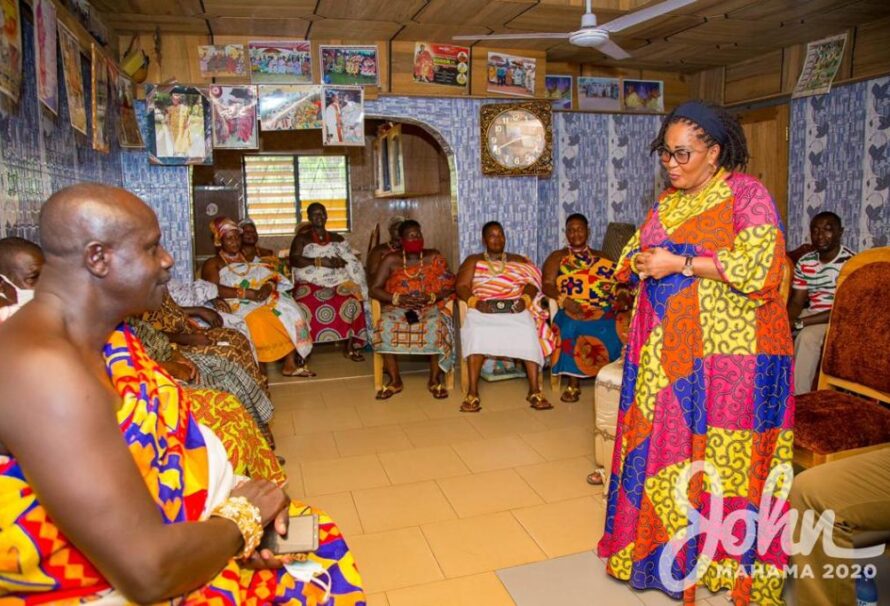 Former First Lady Lordina Mahama has finally joined the campaign trail to ask Ghanaians to vote for her husband and the NDC to come back to power.

She was spotted campaigning in Kintampo as well as Nkoranza communities of the Bono East Region for the NDC parliamentary candidates of the area.

Along with sharing highlights of the People’s Manifesto as well as John Mahama’s commitments to Ghanaians, Mrs. Lordina Mahama additionally appealed to Ghanaians to elect the NDC led by her husband, John Mahama, given that he is a President Ghanaians can rely on, plus he has a performance history of development without bias.

According to Mrs. Mahama, her husband will certainly get the job done to create at least one million jobs, strengthen the economic situation of the country to present to all Ghanaians with possibilities, as well as establish vital infrastructure under the $10bn Big Push policy.

Among the locations the former First Lady visited was the royal residence of the Chief of Jema.

In an interview some weeks ago, Mr. John Mahama indicated that his wife was taking a break from politics since the NPP throughout the 2016 elections mounted a load of lies against her which she could possibly not understand. For this reason, she decided not to take an active part in campaigning for the NDC in this year’s election.

READ ALSO:  Your credibility have been thrown to the dogs - Ibrahim Murtala takes a swipe at TV3 over wrong election projection

“In 2016, there were a lot of lies against her [Lordina] so she was a bit traumatized by the experience so she wants to take a back role, let me do my politics” Mr. John Mahama indicated on Accra-based Asempa FM