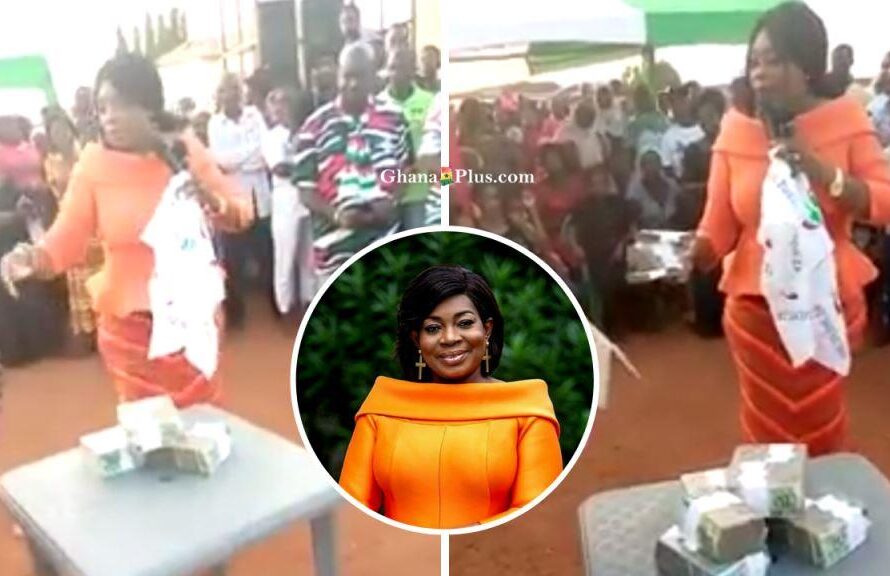 A National Democratic Congress Member of Parliament for Agona East, Constituency in the Central Region, Queenstar Pokua Sawyerr has been captured on camera allegedly displaying bundles of money during a campaign rally in her constituency.

The MP, in a video sighted by GhanaPlus.com, was counting bundles of money to the tune of Ghc500 million old Cedis (Fifty Thousand Cedis new currency) in broad daylight to be distributed to party members ahead of the elections.

The money was believed to be an incentive to her constituents to vote massively for her in the upcoming elections in December.

“All of it is 500milion that is what I have brought, when you go tell them that she came to show us the money, she wasn’t lying,” she spoke in the Fante dialect.

Ms. Queenstar Pokua Sawyerr had in her hand NDC paraphernalia while counting the money with scores of supporters gathered around her cheering her up for the gesture.

She noted it would not be left in the pocket of one person but would be evenly distributed to all members in the constituency.

Ghana politics has always been perceived to be characterized by vote-buying during elections.

However, this year, the perception seems not to be a matter of discussion as many of the face-face interactions which give room for the corrupt practice have been reduced due to the COVID-19 pandemic.

The ruling NPP was, however, cited to be buying vote in the per-elections survey conducted by the Center for Democratic Development (CDD) released last month.