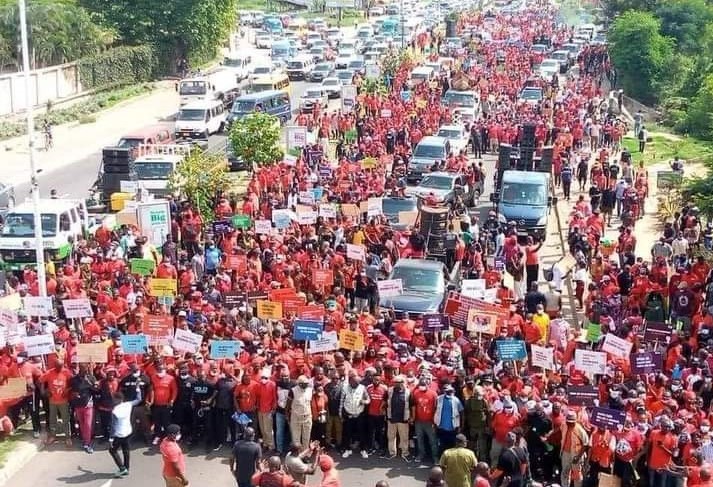 The much anticipated National Democratic Congress (NDC)’s demonstration to demand justice for all persons killed and brutalized by what they described as state-sponsored thuggery and/or adventurism by police and military force is currently underway in Accra.

Dubbed “March for Justice” the protest is also to demand social justice for the teaming unemployed youth in the country and to call on leadership to address the challenges which hinder the better Ghana agenda Ghanaians yearn for.

Under the auspices of the Youth Wing of the opposition NDC, hundreds clad in black and red outfit converged at green hill near Accra Mall to partake in the protest.

A statement released earlier by the organizers said protesters would march through principal streets of Accra namely Madina, Accra business district, Osu, Lapaz and converge at the Jubilee House to present a petition to the President.

“The protest will follow these routes: One chapter will start from Madina, the other from the Accra business district, the third from Osu and the last from Lapaz,” the letter indicated.

“We will all meet at the Jubilee House to present a petition to the President of the Republic, to the Inspector General of Police at the police head-office and the Speaker of Parliament at parliament House”.

NDC leadership/ Mps at the March for Justice

Present at the demonstration are the leadership of the NDC, notably, Chairman Samuel Ofosu Ampofo, Members of Parliament, Samuel Okudzeto Ablakwa, Samuel Nartey George and many others.