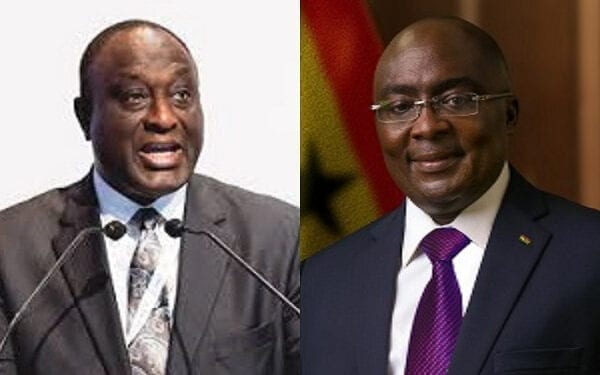 A  private legal practitioner  and a member of the New Patriotic Party(NPP), Bernard Owiredu has dared the Vice President, Dr Mahamadu Bawumia and the Minister of Trade and Industry, Mr Alan Kwadwo Kyeremanteng to deny they are not secretly campaigning  to be elected to lead the ruling New Patriotic Party (NPP) as presidential candidate in the 2024 elections.


There have been calls on all members of the NPP who have presidential ambitions to desist from campaigning at the moment because the time is not due for such activities.

The party leadership want all efforts and energy to be channeled into ensuring that President Nana Addo Dankwa Akufo-Addo succeeds in his second term.

On Thursday March 18, Agric Minister Dr Owusu Akoto Afriyie in a statement refuted claims that he was campaigning to be the flag bearer of the party.

“The narrators claimed that I spent up to GH 1, 000,000.00 Ghana Cedis at the said meeting to announce my bid for the position. This is not only incorrect but it could only be in the imaginations of the one making those claims.

“Meeting 17 constituency executives for each of the 47 constituencies in my house meant I was receiving about 700 delegates. My house does not have the capacity to accommodate such numbers. How therefore can one assume that I paid almost One Million Ghana Cedis to these NPP executives in one day?” the statement said.

Contributing to a discussion on this matter on TV3’s New Day show Friday March 19, a private legal practitioner who is also a member of the NPP, Bernard Owiredu told show host Berla Mundi that posters of several party big wigs are flooding the cyber space campaigning for them to be elected flagbearer.

He said, he has seen posters of Dr Bawumia and also campaign groups being formed in the name of Mr Kyerematen campaigning for them.

However these two personalities have not been able to come out publicly to deny their involvement in these activities, he said.

He dared them to show up and “deny that” they aren’t secretly campaigning.

Meanwhile, a leading member of the governing New Patriotic Party (NPP), Mr Gabby Otchere Darko has asked appointees of President Akufo-Addo who are busily jostling for their presidential ambition rather than focusing on their work to step down.

He said presently, the Akufo-Addo administration needs men and women to help deliver on its mandate.

READ ALSO:  Campaigning now is against the laws of NPP – Nana Obiri Boahen

The time for internal elections hasn’t come yet, he added.

In a Facebook post reacting reports of some appointees secretly campaigning for their presidential ambitions ahead of the 2024 elections, the former Executive Director of the Danquah institute said “The world is in crisis.  Ghana is part of the world.  Therefore, Ghana is in crisis. Which part of this, don’t you get, Mr Cabinet Member!

“This is not the time to be planting for delegates and votes.”

He added “If your focus, as a member of Akufo-Addo’s government, is to first fight for your own ambition and transformation, then, please, feel free to move over to move on.

“Please note: NPP in power must first succeed for NPP to succeed NPP!

“Build on this power we have now for your own power trip not to be tripped by your priority tripped wires. Be wise!”