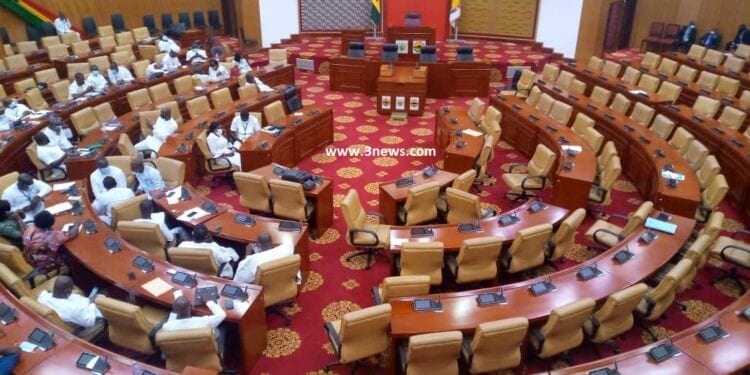 Some of us slept in Parliament – NPP MP

The Member of Parliament for Ejisu Constituency in the Ashaniti Region, Lawyer John Kumah has revealed some members of the New Patriotic Party caucus in Parliament slept in the house ahead of Friday’s sitting.

The move was to enable them secure their rightful place as majority in Parliament ahead of the 8th Parliament proceedings which was expected to begin at exactly 10:am

3news.com report the Ejisu MP made the revelation in an interview on Akoma FM’s GhanaAkoma programme on Friday, January 15, 2020.

“Lawyer John Kumah added that He further explained some of the parliamentarians even slept in Parliament and as early as 5:00am, all 138 MPs clad in white attire had already taken their seats,” the report said.

According to him, they were in the house early just to secure the Majority side of the house which duly belongs to them with the declaration of the Fomena MP.

“W are not leaving any stone unturned and also not leaving anything to chance so storming Parliament as early as 3:00am will ensure we claim what belongs us which is the majority side”.

“As far as we are concerned with the inclusion of Fomena MP to our side, we are the Majority Caucus so it’s in line for us to be here in Parliament this early to secure the right side of Parliament”.

Majority seat tussle: NPP MPs report to Parliament at 3:am

Ghana wake up to the news that Members of the New Patriotic Party(NPP) caucus in Parliament made their way to house as early as 3.am, Friday, January 15 to enable them occupy seats reserved for majority members of the house.

READ ALSO:  NDC will not patronize Asaase Radio as it is owned by Akufo-Addo

The majority seat had been in contention between Ghana’s two leading opposition political parties since both parties were unable to secure majority win in the December 7, elections

Per the Electoral Commission of Ghana’s declared on December 9, 2020 both parties are at par 137 parliamentary win, with only one independent MP.

Last Thursday, January 7, night before the election of the Speaker and the swearing in of the 8th Parliament, National Democratic Congress(NDC) who had claimed severally that they had won majority in parliament with a total of 140 seats occupy the majority seats which is on the right hand side of the Speaker.

Asiedu Nketia explains why NDC have not gone to court