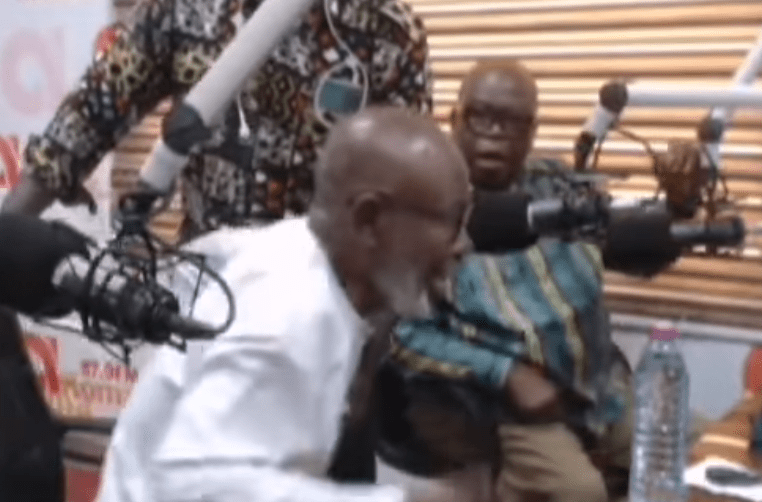 Ghana’s High Commissioner to South Africa, Mr George Ayisi- Boateng and Founding Member of the opposition National Democratic Congress (NDC) in the Ashanti Region, Alhaji Saani Mohammed on Monday, December 14, clashed at Akoma FM, a subsidiary station of the Media General Group in Kumasi in the Ashanti Region during a post-election discussion.

The two astute politicians and buddies, whose friendship span over 40 years nearly punch-up each other over a misunderstanding which ensued during the discussions of the just ended 2020 presidential and parliamentary elections on the station’s current affairs programme, GhanaAkoma.

3News report, tension built up during the discussion, when Alhaji Saani Mohammed described the Jean Mensa-led Electoral Commission as “liars and fraudsters” for declaring the elections for Nana Addo Dankwa Akufo-Addo.

However, the two‘s heated verbal exchange and near-brawl began when Mr Ayisi-Boateng quoted the late Dr. Chuba Okadigbo’s “if you are emotionally attached to your religion, tribe, ethnic and political leaning to the point that truth and justice become secondary consideration, your education is useless”.

His quote, the report indicate was made after the former DCE for Atwima Nwabiagya, Nana Asare Bediako, phoned in into the programme and made a contribution expressing disappointment in the High Commissioner’s earlier submission on the topic of discussion.

The NDC member, Alhaji Saani Mohammed, who all along in the programme had pent-up emotions against his old friend’s submissions, vented harsh words which also pricked the High Commissioner into a vexed posture.

“You have no shame, if I were you, I will cover my head with a pot, you are not ashamed at all, after all, that we have done to you, you had 169 seats, where are the rest, liars, thieves, thieves like you, Nana Addo is a gangster, way driver. This is you when you finish calling the police to arrest me, that is your trademark”, Alhaji Saani Mohammed said.

His words infuriated Ghana’s High Commissioner to South Africa who called him a hopeless and useless man in response.

He indicated that he was not the kind who defends himself with the police because he was capable of doing so himself.

“Me, I don’t call the police, police for what, I can defend myself, not a policeman will defend me”, Ayisi Boateng said advancing towards his buddy of 40years, who was up from his seat in a heated argument.

The report indicates it took the intervention of the programme’s producer, host and General Manager of the station to separate the two good old friends and calm their tempers.