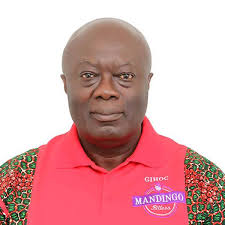 The Chief Executive Officer of GIHOC Distilleries Company Limited, Mr Maxwell Kofi Jumah has said that those defending the Auditor-General, Mr Daniel Domelevo over his alleged fake documents were doing him a great disservice.


According to him, Ghana’s laws criminalizes the use of false documents to hold oneself in an official capacity and also on behalf of the state and it would be better if he would rather accept his relieve from office and go in peace.

“Kwame, those outside defending that man, they are doing him a great disservice. The man who spoke to you right now tell him, I, Kofi Jumah said he is doing Domelevo a great disservice because it is better for him to go quietly so he can be okay because what he did was criminal, he could end up in jail.

In Ghana’s criminal code, it is a criminal offence to present false information about yourself to hold yourself in an official capacity on behalf of the state,” he added.

Many Ghanaians are in jail because of date of birth

He noted many Ghanaian citizens had suffered imprisonment presenting same  as the Auditor-General and believes it would be good for him to count himself lucky that the state only relieve him of his post.

“Kwame people have gone to jail because of that so if you come and say you do not know your date of birth and all that, how did you get to know about your first date”.

The GIHOC boss was of the view that it would have been appropriate for Mr Domelevo to have stated an estimated age on his documents instead of doing so categorically.

Stories of false date of birth in Ghana’s courts

Citing examples of Ghanaians  who have been prosecuted because of false date of birth, Mr Jumah noted in the case of one Owusu J.A verses Ashgold, Owusu an employee of Ashgold was jailed for 6years for presenting false date of birth on his work documents.

The presenter, Kwame Nkrumah Tikese reading another of such case, Alhassan Sinari verse Anglogold Ghana, said a High Court in Kumasi in the Ashanti Region ruled against the employee for presenting work age as against his real age on the company’s occupational pension scheme.

“So Kwame, what am saying is that you can’t just wake up and just change your age,” Mr Kofi Jumah stressed and urged person’s defending Mr Domelevo over the criminal act to stop adding that they were not helping him in any way.

President Akufo-Addo on 3rd March directed the Auditor-General, Daniel Domelevo to proceed on retirement following a revelation about different date of birth recorded on his documents at the Social Security and National Insurance Trust (SSNIT)documents and his passport.

Kumasi in the Ashanti Region, Ada in the Greater Accra Region and Agbatofe in Togo were also stated as his home town on the documents.