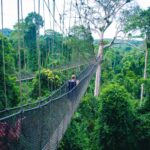 The Central Region of Ghana is boarded by the Ashanti Region and Eastern Region to the North, Western Region to the west, with Greater Accra Region and the Gulf of Guinea to the East and South respectively. It has a total land surface area of 9,826Km (3,794sq mi). They are known as the Mfantsefo or Fante.
The Mfantsefo or Fanti are an Akan people. A subgroup mainly gathered in the central coastal region of Ghana, with some also in the Ivory Coast. The Fante states have the people of Kurantsi, Abura, Anyan, Ekumfi, Nkusukum, Ajumako, and Gomoa.

Cape Coast is considered as the main Fante City with Mankessim being its traditional headquarters. Currently, the approximative population number is about 2.5 million, which has made them the third-largest grouping of Akan people with the population growth rate of 2.1 percent per annum.

The region is also the second most densely populated in the country, with a population density of 220 persons per square kilometers and the most urbanized districts to be Cape Coast, Awutu Senya, and Agona which covers two-thirds.

The Region is endowed with very rich natural resources.
Upper Denkyira District has in it the likes of Gold, Beryl, and Bauxite, with Petroleum and natural gas attributed to Saltpond. Quartz, Muscovite, and other minerals like mica, granite, feldspar as well as timber are in all the forest areas and rich fishing grounds around the Coast.

The agriculture industry is the most predominant industry in all the districts, 52.3% followed by manufacturing (10.5%). Agriculture (including fishing) is the main occupation and employs more than two-thirds of the workforce in many districts in the region.

Tourist Attractions and Festivals in the Central Region

Central Region is filled with many of the most visited tourist centers in Ghana. There is definitely no shortage of interesting things to do or see in the region. These interesting tourist centers include the Cape Coast Castle, Elmina Castle, Kakum National Park, Fort St. Jago, various Beaches, Assin Manso slave river, and many more. The Region’s culture is depicted through its many exciting festivals that are held throughout the year. Some of the best-known festivals are ‘Bakatue‘ literally the opening up of Benya Lagoon into the sea, ‘Edina Buronya‘ a native version of Christmas, Aboakyer by the people of Winneba, Fetu Afahye and Akwanbo festivals by the Gomoa’s, Panafest festival, Okyir festival amongst others.

The 44th U.S President, Barrack Obama made his first international trip to the city of Cape Coast in 2009 which undoubtedly proves the wealthiness of the Central Region.