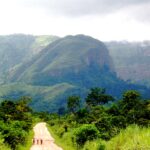 The longest among the sixteen Administrative (formally Ten) Regions in Ghana is undeniably the Volta Region. This unique symbolism depicts from the Regions extension from the North-to-South. Volta Region has an estimated total population of about 2 million people according to the 2010 Census, which covers a total land surface area of 20,570 Kilometers Square.

The western and eastern part of the region is boarded by the Republic of Togo and Lake Volta respectively.

Ho is the administrative regional capital. A city that lies between Mount. Adaklu and Mount. Galenukui on Togo Atakora range, and also serving as the home to the Volta Regional Museum, Cathedral, and Prison.
It was formally the administrative Capital of the British which also contains all types of landscapes and Vegetables that can be found in other parts of Ghana such as, coast, lagoons, Southern Savannah, Northern Savannah, Mountains, waterfalls, and a large part of cultural diversity.

The Nature and large ethnic group of the Volta Region are the Ewe people (68.5% of the population). They consist of several subgroups such as the Anlo Ewe, Tongu Ewe, wedome, and Avenor Ewe. Other ethnicities include the Guan people (9.2%), the Akan People (8.5%), and the Gurma people (6.5%).

Hohoe in the Volta Region also serves an important source of herbal medicine in Ghana and the western world with Aflao also serving as the main gateway to Togo having the best of hotels, guest house, and restaurant.

Tourism attraction within the Region with 25 administrative districts is unparalleled with interesting and fascinating tourist sites such as the Afadjato Mountain being the highest point in Ghana attracting climbers of all ages across the globe.

The Kalakpa Cave Production Reservoir is a special place for environmentalists. The highest Wli Waterfalls in Ghana can be found in the Tropical forest of the Volta Region near Hohoe, with its nearby situated the spectacular Tsalsadu falls at Alavanyo.

Historical sites such as the First Prinzenstein, Ketu Cape St. Paul lighthouse, and the rest portrays the region’s pedestal in a tourist attraction.

Mountain view at the border of Ghana and Togo. Image / ryan-bolton.com

The Region’s Treasure-Troove in a rich diversity of history and culture presents the best festivals and ceremonies in the Country. Famously among them is the Hogbetsotso Festival (Festival of the Exodus) which is celebrated by the people of Anlo Ewe’s in November every year. Also, the Wli waterfalls festival gives a unique celebration full of colourful and brisk coupled with desirous adventures.