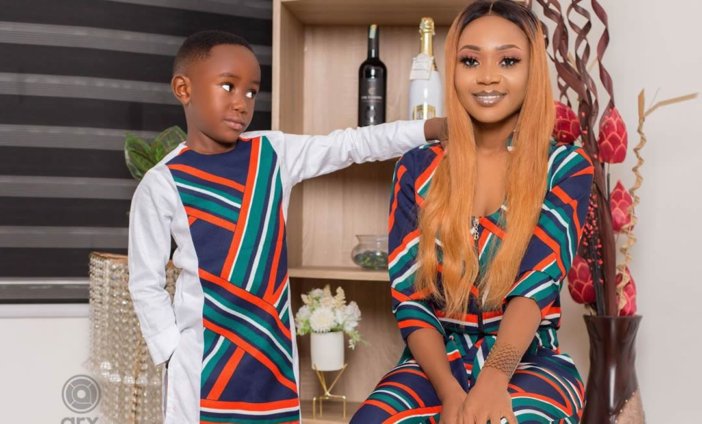 Information gathered by GhanaPlus.com said the actress is currently being held at the Osu Police Station in Accra after failing to meet the bail condition of GH₵100,000 with four sureties, two to be justified when she appeared before the court over the nude photos of herself and son she shared on her social media pages some months ago.

The two sureties, according to the court were to provide proof of ownership of any landed property worth the bail sum.

The news of her detention was made known by the host of Peace FM’s current affairs programme “The Platform” Nana Yaw Kesseh on Monday night.

Rosemary Brown is facing charges of publication of obscene materials and engaging in domestic violence in a case brought before the Accra Circuit Court by Child Right International, a non-governmental organization over the nude photos of herself and her son shared on her social media pages some months ago.

Earlier in court today, the actress pleaded not guilty and was subsequently granted bail to reappear before the court on November 23, 2020.

However, with the bail conditions not fulfilled, the actress would remain in custody until it is met or until the date, she is scheduled to reappear before the court.

It could be recalled that on June 30th the actress shared naked pictures of herself and her seven-year-old son to mark the boy’s birthday.

In the pictures, the actress was seen naked while her son Mudasir Muhammed Yakubu was only in under pant.

she captioned the pictures “Son today reminds me of the very day I gave birth to you with no stress and with no regret…..30th June 2013 exactly 4:46 am Sunday Haha I still remember this date paa because it’s really meant a lot to me, I only felt the 30 minutes pain when you were turning to come out you were too good to me.

I gave birth with no complication, no cute no disability Haha I love you son.

You see how you are looking at me always remember that I love you I’m naked in front of you because this is how naked I was giving birth to you, so in case you find me naked lying somewhere don’t pass by me but rather see me as your mom who brought you to life”.

The actress received several backlashes from the public, including celebrities, the Ministry of Gender and Social Protection as well as Child Right International, a child-centered non-governmental organization in the country.