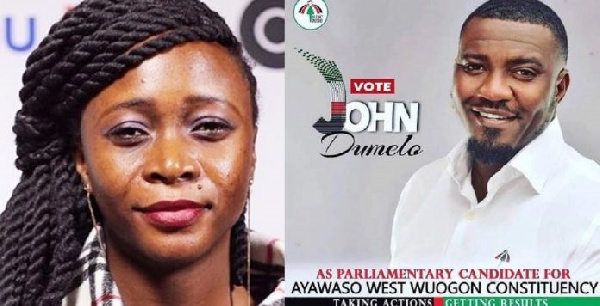 Multiple Ghanaian award wining movie maker, Leila Djansi has taken a swipe at actor and National Democratic Congress Parliamentary Candidate for the Ayawaso West Wuogon, Mr John Dumelo for losing his bid to represent his constituent in parliament in the ongoing 2020 elections.

According to her, elections conducted on bribery should always end in loss adding that the actor could not bribe his people with laptops and expect a win just for doing that.

“Elections conducted on bribery SHOULD always end in a loss. #GhanaDecides. BUT, my Jonivi did so well that, it will keep the MP on her toes to WORK FOR THE PEOPLE. Congratulations @johndumelo1”.

“Politicians need to stop taking voters for granted. You can’t bribe folks with laptop and when you win, your kid goes to Harvard and the voters kids struggle for desks and jobs”.

Let see you history in serving in the movie industry

Leila, 2009 worldFest Platinum Award receiver charged the actor to re-start his leadership journey by first making an impact in the movie sector which he represent then he could come back  better resourced for the position he wish to handling.

“Try again by championing causes in your industry; FILM. Let’s SEE your history of serving. There’s so much to be fixed in Ghana’s film industry. Please lead that fight and then, you come back trained and ready”.

The Sinking Sands filmmaker described as disrespectful the bribing of voters among others all in the name of votes by politicians adding that Ghanaians were becoming more descending hence the need for them to know better.

“Guys, If you desire politics in your future, start NOW where ever you are. Cultivate a habit of serving and leading initiatives. Don’t wake up one morning and start bribing, braiding, pounding and bonding cos you want votes. That’s disrespectful to the people. Start now! Brighten the corner where you are. Politicians need to stop taking voters for granted” she added.

Leila Djansi however, congratulated the actor for the achievement which she said had put the incumbent Member of Parliament on his toes.

Many Ghanaians and her followers have since reacted to the post describing it as well said and on point.

Actor John Dumelo, an NDC candidate in the ongoing 2020 elections, on Tuesday, lost his bid to claim the Ayawaso West Wuogon seat from the incumbent Member of Parliament.

In a close contest, the actor pulled a total of 37,778 votes as against his main contender, Lydia Seyram Alhassan’s 39,851 votes.