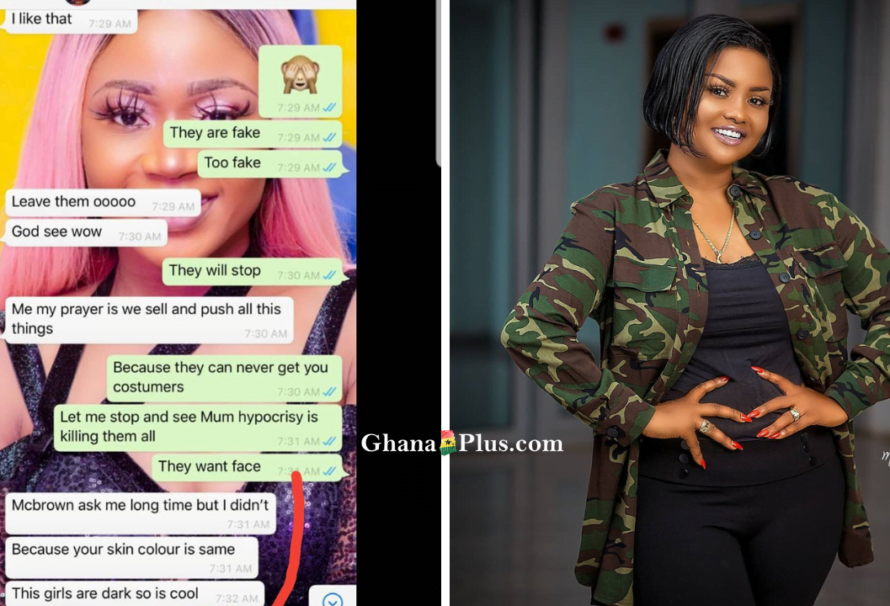 The Chief Executive officer of Pinamang Cosmetic has fallen on the wrong side of Ghanaians and sympathizers of celebrated Ghanaian television host and actress, Nana Ama Mcbrown for alleging that the actress begged her for an ambassadorial deal.

A post cited by GhanaPlus.com and believed to be a conversation between the cosmetic CEO and her brand ambassador, Rosemary Brown; popularly called Akuapem Poloo had the CEO indicating that the renowned actress, who currently holds ambassadorial deals with the biggest brands and the most sought after brand ambassador in the country begged her to be an ambassador of her pinamang products which she rejected.

“Macbrown asked me long ago but I didn’t because your skin colour is same” the Pinamang CEO told the controversial actress always in the news over exposure of her nudity in a WhatsApp chat.

The words by the Pinamang boss who has been in the news in the past days for backstabbing her brand ambassadors, Akuapem Poloo and Afia Schwarzenegger did not go down well with Ghanaians, some of whom believed to be fans of the United Showbiz host, Nana Ama Mcbrown.

They have since reacted to the post calling her a liar, a braggart, and describing her pinamang product as a bomb.

“She is lying big time… mcbrown begged u for ambassadorial deal and u turn her down?!!!gyama woyale… Even if it’s true can u turn mcbrown down for advertising ur product for u…is she aware of the number of ambassadorial deals mcbrown has bagged for herself!!…she shouldn’t ev\\en dare bring mcbrown’s name for her selfish gain…. nkwasias3m na I turned her down…who are u to turn mcbrown down but accept Tracy ,fella and co mtcheeeew nkwasia lie sei” an Instagram follower fumes.

Akorfah2020 on her part said “Did I hear Mcbrown? This woman can lie herh. Na those who ve signed mcbrown ebi ni wu. Mtsuuu”

“)kasa papa,her creams r bomb too” another who goes by the name Armahpomaah indicated.

Another Instagram follower also had this to say “Her cream doesn’t even work I wasted my 490 gh to get bad skin just within 2 weeks and when I complained in her inbox she wanted to go wild on me.. the her serum is bad!!!!!!!!!!!!!! I won’t recommend for anyone”