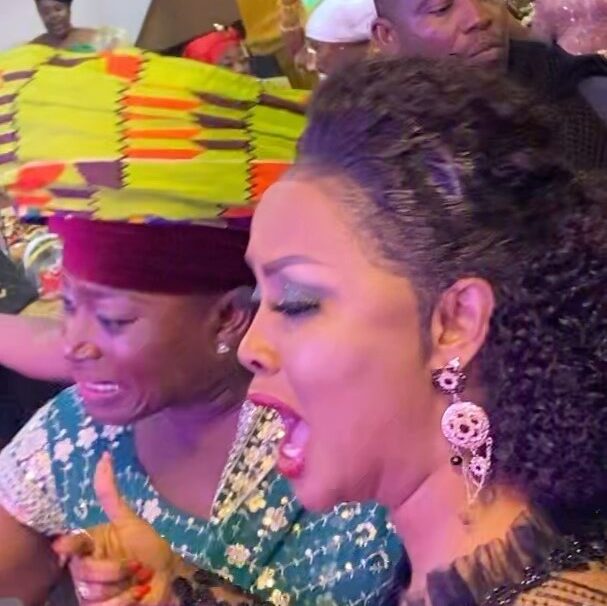 There has been a long-standing perception in the Ghanaian media space that Ghanaian Celebrities, especially, women, are not united and would never be in years to come.

However, Ghanaian celebrities Nana Ama Mcbrown and Deloris Frimpong Manso (Delay), and Akumaa Mama Zimbi seem to have downplayed this perception which is gradually becoming the accepted norm in the country as far as the entertainment industry was concerned.

The three renowned and celebrated Ghanaian entertainment industry players who have carved an enviable niche for themselves were spotted at the Verna Ghana Outstanding Women Awards (GOWA) held in Accra on Friday, October 16, jamming to Keche’s no dulling.

A video sighted by GhanaPlus.com had the three women dance together to the admiration of guests while singing along to the popular No dulling hit song by the Ghanaian duo, Keche.

In another video, Nana Ama Mcbrown was captured pulling Delay back to the dance floor to prevent her from taking a break from their dancing exploit.

The night awarded the two outstanding women together with others for their hard work and the impact made in the Ghanaian society.

Delay, a media mogul, humanitarian, and entrepreneur took home the Outstanding Woman, TV Personality and the overall award for the night, Outstanding Woman Awards, WOMAN OF THE YEAR 2020 while television host, actress, and Ghana’s most sought after brand influencer at the moment, Nana Ama Mcbrown, was awarded Outstanding Woman, Brand Influencer.

Sharing the award on her Instagram page, Delay said ” I won the overall award last night at “GHANA OUSTANDING WOMAN’s AWARDS”!
I was Crowned “WOMAN OF THE YEAR”!
I also took home the award for “Tv Personality of The YEAR”!
I am overwhelmed and humbled, but inspired and challenged to do more!
From grass to grace to “WOMAN OF THE YEAR “!
WE RISE!!!!
#beinspired