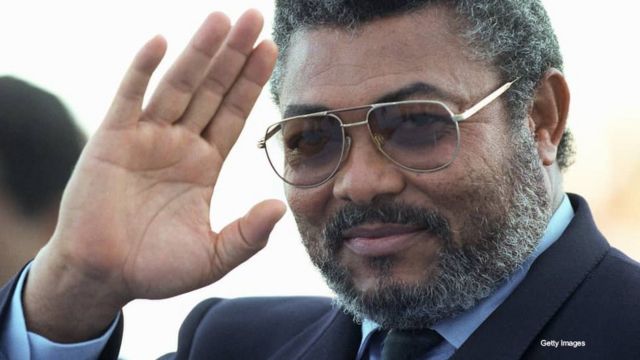 Scores of Ghanaians have taken to the social media platforms to mourn the former President J.J Rawlings whose death was reported on Thursday, November 13, at the Korle-Bu Teaching Hospital.

The Charismatic and laughable president, affectionately, called Papa Jay, report said was on admission at the country’s premier hospital in Accra at the time of his death.

Tributes have since been pouring from all across the country in honour of the flight lieutenant who took the country by storm when he staged a coup d’état in 1979 to overthrow a ruling military government, few weeks to democratic elections and subsequently held the mantle as a democratically elected President in Ghana’s fourth Republic as its first President.

Taken to the various social media platforms, Ghanaians from all walks of life including celebrities have reacted to the news of his death.

Others shared pictures they took during their encounter with the country’s longest-serving head of state, a military man turned politician.

GhanaPlus.com came across some of their comments and posts on the death of the former President and we bring you some.

How Ghanaian celebrities reacted to the news of J.J death

Sharing a picture of herself with the ex-president, actress Joselyn Dumas said “No words!! 💔💔💔what a sudden terrible loss to Ghana, and the continent. We will never forget you papa J! Rest in Power! #Legend #ServantLeader

Ghanaian Musician and former girlfriend of Shatta Wale, Michy wrote “A great tree has surely fallen but will Forever remain in our thoughts & hearts 🙏#RIP Sir”.

Duvet host and life coach, Ms. Nancy wrote “THANK YOU FOR YOUR SERVICE SIR. He had the personality. He had the voice. He had the confidence. He had style. I was in love with his sunshades and this particular style of dressing which was a combination of the classic (Western) and Natural (Áfrican) style personalities. Never seen anyone so handsome and powerful and not vain! Rest Well Sir. You were great.”

READ ALSO:  I am sorry if I offended you during the campaign, Prince David Osei

Controversial, television personality, Afia Schwarzenegger said “Your kind words of encouragement will forever be in my heart. I will miss you… Rest in peace my hero”.

Musician and radio personality, Okyeame Kofi on his part noted “Feels like yesterday when I was with you at home. You called me chief and I never understood why but I couldn’t ask because of the childhood JJ stories stuck in my head.It was only when I had the opportunity to be close when I realised the Amazing man you are.RIP. Papa Jay. Forever in our hearts”.

Ghana has indeed lost a gem and GhanaPlus.com joins all of Ghana in wishing the former first family our heartfelt condolence. Same goes to all of Ghanaians.