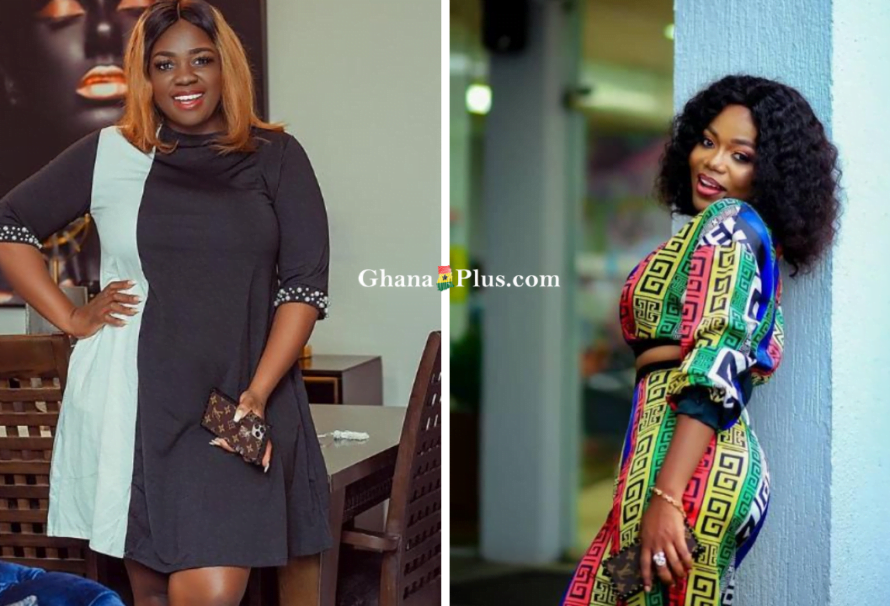 Tracy Boakye and Mzbel battle it out over married man

Actress, Tracey Boakye, and singer Mzbel are exchanging blows online over a married man who is believed to be a wealthy politician.

The war between these two promiscuous ladies begun after the actress who paraded herself as a hardworking woman and motivator accused Mzbel of trying to woo her man.

In a viral video, Tracey Boakye alleged that the 40-year singer, Mzbel was suffering from old age, thus did not have what it took to keep a man.

“Due to your old age you cannot keep a man, that is why I was able to snatch your man away. The last time he cheated on me with you, he said it was a mistake and he begged me for engaging in an intimate relationship with you,” she said.

Tracey Boakye revealed that she had been able to accrue wealth, properties, and success by exchanging her womanhood for money from the sugar daddy they were battling for.

She noted that she gave birth with the married man and has gotten a beautiful mansion at East Legon while driving cars of her choice, something Tracey Boakye claimed Mzbel could not accomplish due to her old age and low IQ.

She stressed that the “16 years” hitmaker was still renting and cruising around with an affordable car.

Mzbel reacting to the allegation stated that they had nothing in common to be sharing the same man.

She noted that Tracey Boakye was being emotional over someone’s husband and described her action as “barbaric.”

Mzbel indicated that she was a proud old woman and never went about fighting others over somebody’s husband.

“Learn sense, humble yourself to keep enjoying someone’s husband’s wealth. I am happy you have exposed to the world the secret of your so-called wealth because all these while you turned a motivational speaker saying you made a wealth out of Ghc300 and your hard work,” she giggled.

Mzbel advised her rival to turn onto a new leaf otherwise she might pay a heavy price for being loud on social media.

Stephenie Benson celebrates 32years of marriage; see the journey so far in pictures

NPP did well with Year of Return, I can attest to that - Rex Omar