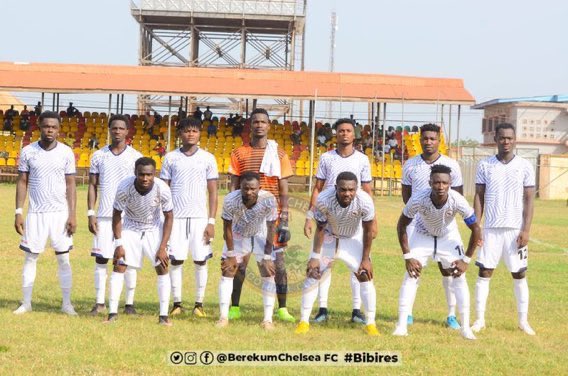 Berekum Chelsea defeated Great Olympics in matchday 33 of the domestic top-flight at the Sunyani Coronation Park on Sunday.

The Biribes inflicted a 2-1 win over the Dade boys on Sunday.

A strike each from Benjamin Abaidoo and Kofi Owusu was enough for Chelsea to pick all points at the expense of Olympics whose chances of playing in the top four look slim.

Enterprising midfielder Gladson Awako scored the consolation goal for the Accra based club.

Benjamin Abaidoo connected a cross in the penalty box to give the host the lead in the first half.

Gladson Awako made it 1-1 for Olympics with a beautiful finish.

The host restored their lead in added time, Kofi Owusu this time around took his chance by calmly finishing home a good strike.