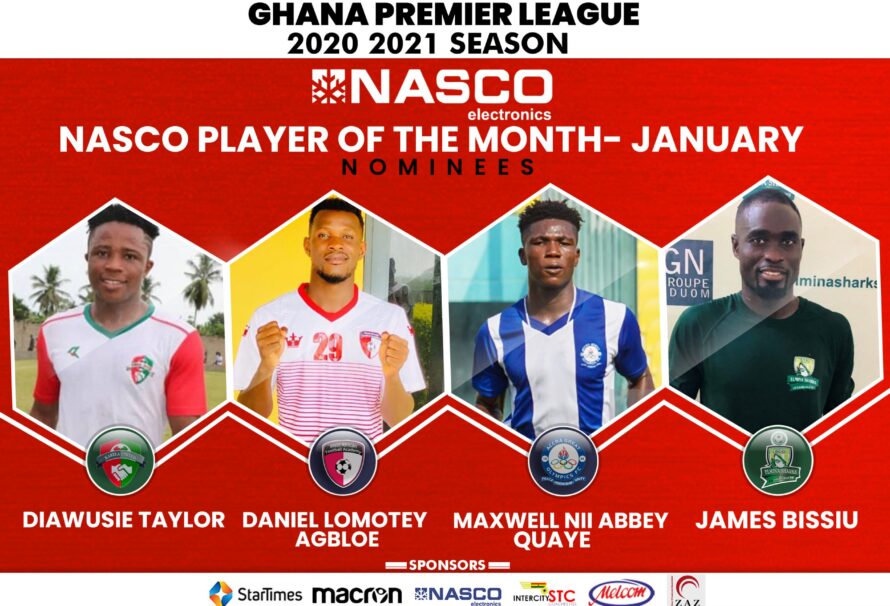 Four players have been shortlisted for the Ghana Premier League Nasco Player of the Month award for the month of January.

The winner of the 2020/21 GPL NASCO Player of the Month for January award will be announced on Wednesday February 10, 2021.

Winner will receive a NASCO Television set and a personalized trophy.

The nominated players are:

The leading marksman scored his 8th goal of the season in the epic clash between his side Karela FC and Medeama SC at the Anyinase CAM park on Day 11 of the season. Now level on goals with Daniel Lomotey, Taylor is poised to continue his impressive scoring prowess and help his side maintain their lead on top of the league log. In the month of January, Taylor scored a total of four goals with a brace in the game against Berekum Chelsea and a goal each against Elmina Sharks and Medeama. He also assisted his team mates twice in the month and emerged as won one MVP award.

Lomotey may not be in the GPL any longer after completing a move to Algerian side ES Setif but the former WAFA forward left a mark in the league in the month of January. After scoring four goals in their match against four goals in their Week 9 game against Medeama, the prolific goalscorer also scored for the Academy side when they hosted Asante Kotoko on Day 9. He also won the NASCO player of the match award in the game against Medeama.

Quaye has been a very key player for Great Olympics this season. In the month of January, he helped his side secure 2 wins, one draw with two defeats coming their way.  He scored four goals for the Dade boys  and helped his side record important wins in the month.

The experienced Elmina Sharks midfielder scored three goals for Elmina Sharks in the month of January. His impressive performance also saw him win the Nasco Player of the match award twice